Religious Epistemology Series Part 1
Ignosticism: Theological Noncognitivism
Introduction
Belief in God, or some form of transcendent Real, has been assumed in virtually every culture throughout human history. The issue of the reasonableness or rationality of belief in God or particular beliefs about God typically arises when a religion is confronted with religious competitors or the rise of atheism, agnosticism, and theological noncognitivism, i.e. ignosticism.
Ignosticism
Ignosticism is the theological position that every other theological position assumes too much about the concept of God.
Ignosticism holds two interrelated views about God. They are as follows:

The importance of clearly stating any given definition of that referent it seeks to define is not at all trivial. If our definitions are in conflict, then this disparity makes it impossible for us to ascertain the correct definition. There are two reasons for this. First, minus a referent the words used to describe something technically do not describe anything at all—and so cannot be about anything. This renders the definition meaningless even when it sounds like a proper definition. Second, provided an incorrect definition, the words supplied us would not adequately or accurately relate back to the referent and so would render the reference invalid, making any discussion on whatever thing the referent seeks to establish irrelevant.
If my reasoning is sound, then belief in whatever object or thing the referent is supposedly about is unjustified until all three criteria of Referential Justification are sufficiently met. If the criteria are not met then it becomes far to easy to make the mistakes of false attribution and equivocation when discussing the object in reference to the belief in said object. Referential Justification helps to ensure we do not make sloppy informal fallacies of this kind.

Religious Epistemology Series Part 3
Referential Justification Wheels: An Illustration of the Logic
To better illustrate my line of reasoning, I have provide two illustrations, in the form of a wheel of justification, which roughly depict various steps which need to be considered between a referent and the belief in the referent. 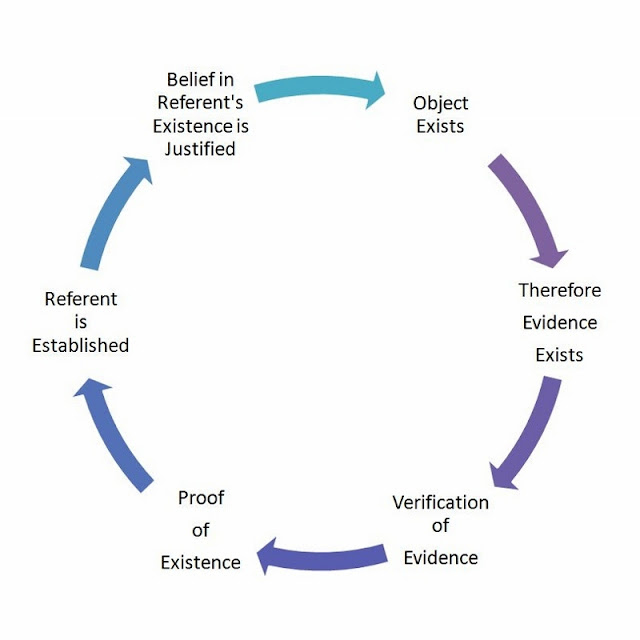 Panrational Referential Justification Wheel (PRJWh)
1) If Object exists, 2) evidence will refer to object, 3) thereby qualifying object as real. 4) If real, 5) evidence can be tested and verified to 6) establish referent and 7) provides justification for belief in referent—i.e., the object really exists so believing it exists is justified. 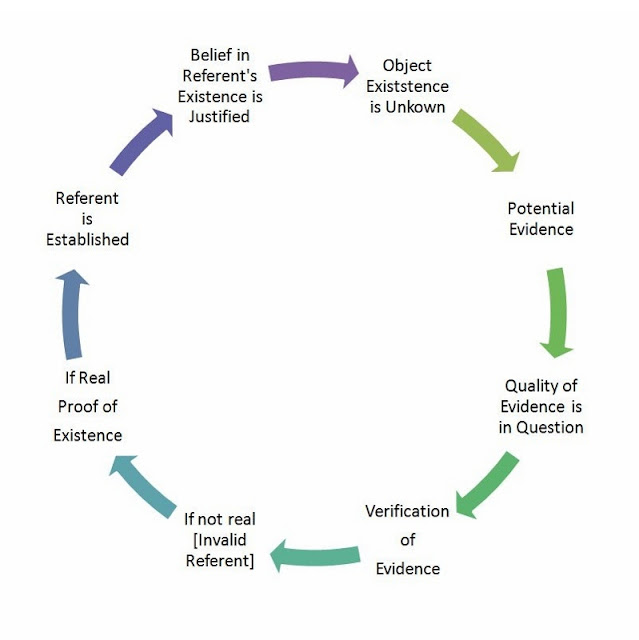 Epistemic Referential Justification Wheel (ERJWh)
1) If an object’s existence is unknown, 2) but it appears there is potentially evidence in favor of it, 3) then depending on the quality of evidence object may or may not be real. 3) Verification of evidence is required to either verify or falsify the reality of said object. 4) If object is not real, then no referent exists and we can go no further (the line of questioning has come to a dead stop). 5) If the evidence demonstrates object is real, then referent probably exists. 6) If referent exists it can be verified, 7) and the referent can be established, 8) thus lending credence to the belief in referent’s existence.
Religious Epistemology Series Part 4
Referential Justification as an Objection to Reformed Epistemology
Here I am going to flesh out an objection to Reformed Epistemology. First, based on the notion that any referent must be established (i.e., verified) before we can justify a belief in it, and second, based on the observation that Reformed Epistemology can only establish a referent from a basic belief via induction, which is a major chink in the armor, because induction does not guarantee correct beliefs for reasons we shall discuss.
Before we can object to Reformed Epistemology, however, I must explain why I have brought up the issue of referents with regard to belief. It is my understanding that in order to hold a belief, the belief has to relate to something, either in reality, or else a concept. Nothing new here. But when a said referent is supposed to be real, that is, it is not a concept but an actual tangible part of reality—then it needs to be verified, that is to say, established before we can claim our belief in the referent accurately reflects what that referent is in fact referring to in reality.
The Problem With Reformed Epistemology
Reformed Epistemology is the belief that if one holds a basic belief, then no justification of the belief is necessary. As such, Alvin Plantigna has applied this to Christian theology. More or less, the conclusion is that belief is warranted, that is, belief in God is rational and no justification of the belief is necessary because Reformed Epistemology rejects the notion that belief in God is irrational unless supported by sufficient evidence, where evidence is construed as providing propositions from which to infer God's existence. Reformed Epistemology contends that the requirement of evidential proof is unduly strict, for there are many reasonable beliefs that one may accept without argument.
What I contend here is that Reformed Epistemology falls short as a tool for discriminating justified from unjustified constituent beliefs. As such, it cannot be relied on to claim a belief is rational or warranted. Here’s why.
Consider how referential justification works. In order to have a word or phrase relate to something we have to have a referent. Without a referent, then it is uncertain whether our beliefs could be about anything which exists or not. In order to justify our beliefs, we need to establish a referent.
Now assume that Reformed Epistemology allows us to maintain a basic belief in something. No justification is necessary to hold a rational belief just as long as that belief is properly basic. The problem, as I see it, arises when we try to establish the referent, something required in order to demonstrate the belief is actually about something. Indeed, in order to get from a basic belief to a referent the Reformed Epistemologist must rely on inductive reasoning.
The Reformed Epistemology goes something like this: belief in God is basic—therefore no justification is required—therefore belief is rational. Inductive reasoning takes us the next part of the way toward establishing the referent. If belief is rational, and believers believe in God, then it is safe to assume God exists as the referent and object of people’s belief.
Remember earlier when I mentioned induction is the kink in the armor to Reformed Epistemology? Using induction means the possibility of God’s nonexistence is equal to the possibility of his existence. This occurs because with inductive reasoning the truth of the conclusion is not always guaranteed (e.g., If we only see white swans then we might assume all swans are white. We would be unaware of the fact that there are also black swans).  What this means is that inductive reasoning can yield both correct and incorrect beliefs. Considering this, the only thing we can be sure of is that, when trying to establish the existence of a referent, both possibilities are equally uncertain (it may exist—but then again—it may not). Certainty in ones belief about something which is said to exist can only be gained by having established the referent as real, and only then can belief in the referent be considered justifiable.
Conclusion
Reformed Epistemology fails to justify the belief in the referent which it is said to be derived from. That is to say, Reformed Epistemology seeks to justify belief in God as rational, but minus a referent, belief in God makes no rational sense. As such, it would not be rational to believe in a referent that is, in point of fact, completely nonexistent (since there is no such thing as a nonexistent referent). Reformed Epistemology then cannot claim the belief as warranted or rational without first demonstrating that the belief actually refers to something. Failing to justify the belief, the whole of Reformed Epistemology collapses—or regresses into fideism.
Some Helpful Resources
Internet Encyclopedia of Philosophy (peer reviewed)
http://www.iep.utm.edu/
Stanford Encyclopedia of Philosophy (peer reviewed)
http://plato.stanford.edu/
Wikipedia Philosophy Portal
http://en.wikipedia.org/wiki/Philosophy