The Story of a Teen Who Humped a Jesus Statue in the Face: Or Why Legally Punishing Someone for a Non-Crime IS Criminal 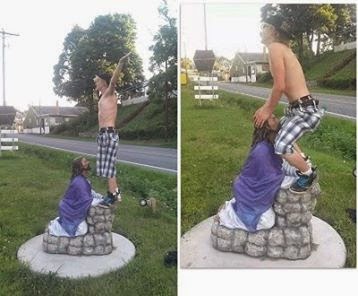 Channel 6 WJAC news in Pennsylvania has reported the follow up to the Pennsylvania teen who was earlier charged with criminal misconduct based on an obscure PA law and threatened with up to 2 years in prison for doing nothing more criminal than posing in front of a Jesus statue.

The poses were sexual in nature, sure, but this lewd act done in jest was quicly forgiven by the party offended. It was only the radical religionist district attorney Bill Higgins that decided to mount a holy crusade against what he perceives as a ideological war of 'us vs. them' and theist vs. atheist.

I am going to analyse the comments he made as reported by WJAC Channel 6 news on the court ruling along with my own personal commentary.

First off, Higgins is not wrong, there is an ideological war being waged, but I'm afraid it's being wage by theocratic bullies like him who wish to impose his religious belief system on others regardless of what the law may state, obvious by his startling and complete disregard for the First Amendment.

Channel 6 WJAC reports as to the final sentence of the teenager:

The boy was admitted into juvenile diversionary program after being charged with desecration of a venerated object stemming. He posted a picture of himself performing lewd acts on a statue of Jesus Christ that was outside the Love in the Name of Christ church in Everett on July 20.

The boy appeared before Judge Thomas Ling and agreed to a consent decree signed by all parties involved, including the boy, his mother and his attorney, Karen Hickey. The boy must not use social media during a six-month probation period as well as perform 350 hours of community service.

Among the other punishments, he must obey a curfew of 10 p.m., no alcohol or other controlled substances monitored by random drug testing and stay in school.

District Attorney Bill Higgins presented the decree to the court.

After accepting the agreement and while settling the number of community service hours, Judge Ling focused on the religious rights of Love in the Name of Christ, noting that the juvenile’s actions infringed upon their rights to practice their faith. Upon successful completion of these terms and conditions, his case will be dismissed and the juvenile will have no criminal record.

This should frighten anyone within their right mind, because it shows that an unconstitutional law put into the hands of overly religious zealots can be used to inflict an unjust tyranny upon the populace.

Bill Higgins is a theocratic bully, because he is making a scapegoat out of a legal minor to serve a not so subtle religious agenda. Mr. Higgins should really try to pick on somebody his own size. But instead he is contended to shoot fish in a barrel. I think this tells us all we need to know about the character of Bill Higgins.

The problem is, I'm afraid, that Higgins holy crusade reflects the very lack of empathy, compassion, and understanding that most theocratic societies lack. This should come as no surprise, but it is no less disconcerting.

Notice that the teenager has been banned from using social media. On the surface, this appears like a trivial sentencing, no big deal. In fact, it is the punishment most concerned parents would administer to their own rebellious children if they caught them doing something like the teen did in this case. But such a notion would be wrong. Unlike a concerned parent's punishment this punishment is a legally binding sentence as part of the boys parole.

It's not simply an act of stern parenting, it is the legal imposition onto the boy's daily habits and choices as a free citizen. If he even gets caught using social media once in what appears to be an abnormally long period of banishment (a full half-year? Really?) the incident would risk becoming criminal and therefore give the zealot Bill Higgins all the incentive he needed to legally charge the teen with a criminal misconduct thereby placing a black mark on the boys permanent criminal record.

Needless to say, the conditions set--done so rather arbitrarily I might add (a full half-year? What's the logic behind that?) could lead to sentencing the teen to a stricter sentence if he fails to adhere to all the conditions of the sentence.

First off, this is not okay.

Thirdly, does it not bother people that the judge seems equally brainwashed here? How does what the boy did infringe upon the religious group Love in the Name of Christ's right to practice their faith?

What the boy did was symbolic of something else, and there didn't seem to be any malicious intent directed at the Name of Christ organization, which is why they dropped all charges.

Yet this teenager is facing strict punishment and legally binding parole?

Do we need any more proof that America is a theocracy? How can this even come to pass?

Well, it requires a legal understanding of very specific laws. If it wasn't for Bill Higgins legal knowledge, or the fact that he practices law in Pennsylvania, this case wouldn't even be a case.

Unless you happen to live in Pennsylvania, that is, which has too many old blowhards in top authority positions who also happen to be right wing fanatics who care more about witch hunts than they do protecting the legal rights of the citizenry. How is punishing this boy protecting the legal rights of Christians? It's almost as if Bill Higgins and Justice North (please don't pardon this intentional slip) believe that Christians being offended is a crime worth legally punishing.

If so, then they clearly have their work cut out for them, because offending people's feelings is only criminal in the most backwards of countries where theocracy reigns supreme. I find it rather telling that Bill Higgins doesn't beat around the bush to which version of America he fantasizes about living in--and to which he will go through extreme measures to ensure becomes the great land of intolerance and hypersensitivity which much of the Islamic nations have become and in which their people must constantly endure the fear of statewide retaliation to their mere thoughts and opinions, because in a theocracy, every little offense matters.

This is cause for concern.

In the article Bill Higgins is reported as saying:

"I know that there are many groups that say this case is about religious rights, and quite frankly, they are right. But it is the religious rights of the Christian organization that owns the statue and has placed it for display on their private property that have been implicated. They have every right to practice their faith unmolested. In American, we all enjoy the right to freedom of expression and the freedom to practice our religious beliefs without interference, but that right ends where those same rights of another begin."

Bill Higgins is guilty of not only favoritism, by his own admission no less, but the fact that he views this as a holy crusade and has admitted as much--just so you know I wasn't being hyperbolic in my choice of words.

Second of all, the teenager did not molest any Christians who were practicing their faith. He molested an inanimate object when no Christians were around. That is a key difference which shouldn't go overlooked.

Further, this so-called molestation (I say so-called because the statue never complained any--and it does look like that particular Jesus was begging for it) only was discovered online after the fact. So the only people who could feel molested were those who confused seeing something mildly offensive as obscene and then condemning it as pornography and then going about finding some obscure anti-pornography law to punish the teen after the fact.

All this is troubling, to say the least.

“As I have previously noted, Facebook and street corners are not the proper place to resolve constitutional issues, and while there has been a whole lot of name calling, character assassination and threats of retaliation, there has been no effort by any of these advocacy groups to actually challenge the constitutionality of the statute in question through the legal process.”

A couple of things.

Since this is an obscure state law then only those who reside in Pennsylvania have any legal authority to challenge the law, unless of course, for some reason, the case were taken to the Supreme Court in which case the Supreme Court would decide the constitutionality of the law, not the people of Pennsylvania.

Furthermore, since this entire incident was found out about via Facebook it is hypocritical in the extreme to say that Facebook is not the place to resolve constitutional issues when you, in fact, are doing just that. Bill Higgins proves that he not only thinks people are dumber than he is, he also reveals himself to be the worst kind of hypocrite. But Higgins isn't done wowing us with his crass disregard for others quite yet. He goes on to inform:

“He is a 14-year-old boy with the potential to have a bright future. I am confident that if he applies himself, he can put this matter behind him and become a productive citizen.”

Apparently Mr. Higgins has appointed himself supreme dictator of what constitutes a productive citizen.

Never mind the fact that the teen may very well already be a worthy and productive citizen. It's just that, well, he did that one thing that one time that somebody didn't like.

And for that, a sea of endless troubles.

As a concerned citizen of the United States, if I were to offer Mr. Higgins any advice, it would be to get a life and stop wasting everyone else's time. We might also hope that he'd grow a conscience while he was at it. Although short of a genuine miracle, that doesn't seem very likely.