Belief Doth Compel Thee: Why It’s Important to Be Reflective 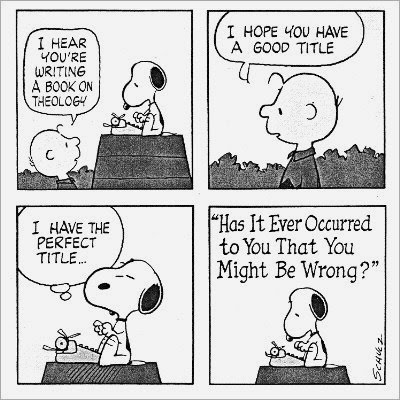 Religious beliefs can impact people in different ways. In fact, our beliefs can influence our behavior and thinking to a startling degree. One of the things that helped me leave my religious beliefs behind was that I took a step back and looked at them as an outsider would, as someone who didn’t particularly share the same sets of beliefs as me, and who might even be critical of them.

What I learned by doing this was that many of my beliefs defied common sense, others were uncertain, and many others still were just flat out false. This retrospective of looking from the outside in allowed me to see things I haven’t before and eventually it came down to the hard decision to abandon the beliefs that didn’t compute and start from scratch.

I’m very glad I did.

The deconversion process wasn't always easy. Sometimes it was downright painful. But in the process I learned to be more selective, more mindful, of the sorts of beliefs I chose to hold on to.

I became doubly reflective about precisely how my beliefs were influencing me and I started considering how my beliefs guided my thinking and so too behavior. And it is here where I learned the clinical precision matters when evaluating your own beliefs, and subsequently, the beliefs of others.

I have learned the hard way, however, that it’s not so much what you believe that matters but how you get there that counts.

Anyone can believe anything they want, but believing in something because you vetted it and it passed the test, well, then that’s what we might call a sound belief.

That’s a belief worth holding onto.

Beliefs that are unproved or uncertain, they are more problematic, and the best we can do is simply keep an open mind, always considering the fact that we could (very likely) be wrong.

But the fact remains, our beliefs help mold how we perceive the world around us, how we engaged with it, and what we will choose to do in the future. This is why I place a strong emphasis on the importance of taking the time to take a step back and look at our beliefs reflectively, critically, and even skeptically if necessary.

Now, there are certain systems of belief in place with rigid architecture that comes prepackaged with standards of what constitute good and bad beliefs. We call such systems of belief ideologies. Now, there is no more a powerful ideological fountain than that which religion provides, so it serves us good to examine how religious belief impacts us and to what ends, both the good and the bad.

Sometimes religious beliefs motivate us to the good, as Arnold Abbot, a 90 year old homeless advocate in Florida, is proof of. Abbot stood up against a Florida law that refuses to allow him to feed the homeless. After being arrested and then given a citation for feeding the homeless, Abbot stated that, “It’s our right to feed people, it’s our First Amendment right and I believe in the fatherhood of God and the brotherhood of man, and we should be allowed to feed our fellow man.”

This is a clear case of a man allowing his personal convictions and religious beliefs to compel him to do good. Although I admire his humanitarian efforts, I think it needs to be said that Abbot also represents a religious person who isn’t all that reflective. After all, he hasn’t really given any consideration to the fact that his actions, although well meaning, risks setting a bad example for others when he teaches others to defy the law in the name of their religious beliefs. Sadly, this makes Mr. Abbot just as reckless as those crazy religionists who take their sick kids to faith healers – often in defiance of the law - instead of getting them the necessary medical attention they need from real doctors at real hospitals that can really cure whatever ailment their child needs.

If Abbot wanted to be a better example, he could start a fundraiser to build his own shelter. His recent media attention would only bolster his fundraising campaign and he could continue doing his good work without breaking the law or setting a bad example. Just a suggestion.

Christopher Hitchens lamented that religion poisons everything. I can’t argue with him, because his observation is simply that religion compels people to do bad more often then it does good, and this bad has a way of hurting us all, like a bad poison. More often than not, people’s religious beliefs compel them to hold beliefs that, if acted upon, lead to the unfair treatment, and sometimes even harm, of others.

Take the Shi’ite Muslim religious custom of Muharram, where they mutilate their wailing and crying children with sharp knifes in the name of their religion, for example. There is nothing in this Muslim tradition that is healthy, sane, or beneficial to the children of the people enacting the barbarism. It simply is an expression of faith based on bad ideas and even worse behavior as a consequence of holding these bad ideas.

Or consider infant circumcision, which is an undeniable form of genital mutilation. Or, for that matter, female genital. All of these acts of horrible violence against children have been, and continue to be, enacted in the name of religion by the religious.

I too, having been raised Christian, am circumcised. But I never asked to be. You may not think it is a big deal. But I tell you, part of my penis is missing, and you can’t tell me that that’s a good thing. Undeniably, this is a decision my parents made, thinking that it was normal, because the practice was a religious custom that everyone simply followed without question. But I refused to allow my own son to be circumcised. Mainly because, I never wanted to harm my beautiful baby boy, but also because circumcision has no proven medical benefits – and that’s a fact we have to deal with when we choose to either uphold the belief that circumcision is something we should do to our children or whether it is an outmoded religious customs that needs to go by the wayside. I vote for the latter.

Another recent case of religion compelling people to think and act in ways that poorly reflect on their ability to critical evaluate their beliefs and the consequences of acting on them comes in the form of Gordon Klingenschmitt, a Republican official elected to Colorado's House of Representatives, who is so convinced that President Barack Obama is demon possessed that he wrote a “non-fiction” book about it. (I literally laughed out loud when I read that it was categorized as non-fiction. Non-fiction my ass!) Further, according to Right Wing Watch, Klingenschmitt, who is a former Navy chaplain, claimed in an interview that he once conducted an exorcism on a young woman that “cured” her of being a lesbian. (Darn those lesbian demons!)

This is clearly religious ideas, concepts, and beliefs impacting uncritically minded people’s behavior and thinking for the worse.

And there is a point at which someone who is so unquestioning, and so gullible, that their religious beliefs compel them to think and act in ways that are unfathomable, such as this lady, who explains in great speculative detail how the anti-Christ and Satan are brainwashing you through the fancy advertising of a popular energy sports drink. (Apparently Satan's diabolical message is that milfs love big fucking cans - I kid you not, this is the woman's conclusion about this secret, anti-Christian, evil conspiracy of subliminal messages. The most evil thing Satan could think of to day, apparently.) 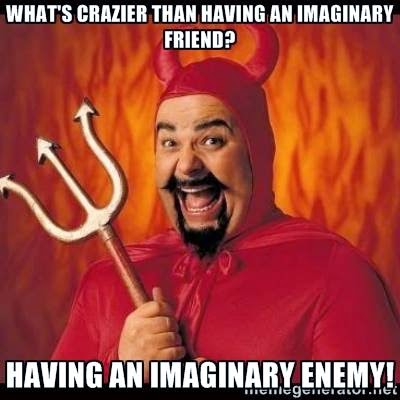 Ultimately, religious beliefs influence our everyday lives, whether we are religious or not. This is why it is important to reflect on what holding a specific ideology does, and we must always take a healthy step back from our own beliefs to examine them from the outside looking in. Maybe we’ll see something we hadn’t before. Maybe we will see why other people are overwhelmed or shocked by our way of thinking or behavior due to the kinds of beliefs we hold, good and bad.

But to deny the fact that religious belief doesn’t compel or influence our thinking or behavior is simply to choose to be uncritical, unreflective, and closed minded. Such people have no standard for gauging what is good or bad, because, well, if their religious beliefs dictate that mutilating their children is a good thing, they go right ahead and do it—regardless of the consequences.

This is the danger I want to avoid. Being uncritical of one’s own beliefs, of one’s own behavior, often leads one to folly. If we don’t want to be foolhardy then it pays to be mindful of our beliefs, of the ideologies we accumulate, the teachings we adhere to, the political as well as the religious beliefs to which we subscribe. The more mindful we are, the more we can use our common sense to see that harming children for any reason, even religious ones, is never good. If people were more mindful, they would be aware of the fact that the illuminati is not sending secret messages through the labeling of a popular soda beverage company or that the President of the United States is demon possessed.

You see, we have to be aware of how our thinking and behavior impacts others, not just ourselves. And if necessary, we may have to alter our thinking or behavior so as to not make the mistakes of those who, in their obstinacy, refuse to be mindful and continue onward in their persistence of blind, pig-headed, faith and conviction - doing what they thinks is right but is harmful or incomprehensible simply because they neglected to give the proper amount of retrospective, introspective, consideration of their beliefs.

All we have to do is pause, take a deep breath, and then take a step back. If you can do this much, then you will gain a whole new perspective on life. You will be able to see the landscape more fully. You will be able to plot out your choices and your actions instead of just acting upon them as if by instinct.

Being mindful and reflective is important least of all because it’s how we learn to gauge the quality of our beliefs. It’s how we learn to stop taking our beliefs for granted. It may not always be easy, but I think it is necessary – especially if you want to say that, in the greater scheme of things, your beliefs matter.
Posted by Tristan Vick at 9:34 PM