Don't Shit Where You Eat (Religion of Peace My Ass) 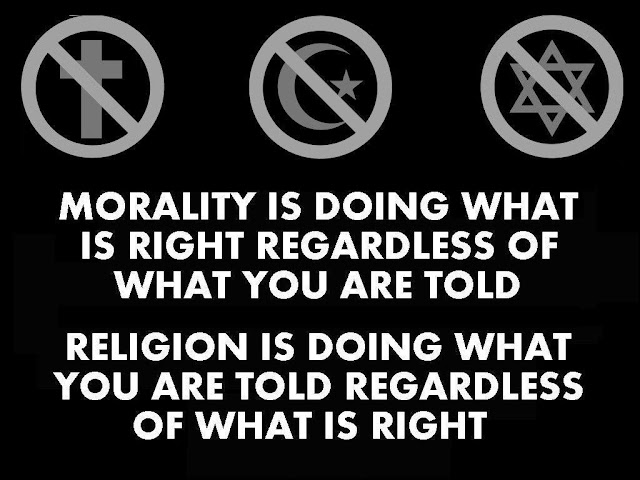 Let's imagine... you had a book that said it's perfectly fine to shit where you eat.

And because of your devotion to this book, you formed a belief early on that it was perfectly all right to shit where you eat. And this you treated as a sacred truth.

After all, your parents always shat where they ate. They taught you it was okay. Moreover, everyone in your community shits where they eat. And when they come over to your house, they love to shit where you eat too--and so do you!

Then, one day you mature into adulthood and go out into the world to learn the ways of your fellow mankind. And you visit a distant land and the people there are friendly and welcome you with open arms and smiling faces.

Then, that evening, while breaking bread with them, you climb up onto the dinner table, drop trou, and shit right in the middle of the dinner table. Right beside the roasted chicken and mashed potatoes. You drop a big, steaming, duce.

To your dismay, everyone is appalled by this! Repulsed even. And unmistakenly disgusted by your crude, uncouth, and foul behavior.

And your only defense is to say... "B-but it's okay. See? For I have it written here in my holy book that it is perfectly fine to shit where I eat! And what's more, that it should be desired!"

Yet everyone with half a working brain knows that's not how it works. The majority of the real world doesn't shit where they eat, nor would they want you to. And they have good reasons and real world evidence for why this is so. Reasons like its unsanitary and spreads disease. That it's gross, polluted, and invoke undesirable physiologic reactions. All this is evidently laid out, unlike the claims of your fairy tale book which merely makes unfounded and unwarranted claims that are either in bad taste or simply goes against basic common sense, if not both.

Your fairy book may say "Religion of Peace," but everyone really knows the truth. It's just shitting where you eat.

And when you shit where other people eat, well, then those people have a right to ask you to leave.

But please, for all the is sane and good in the world, don't go and act shocked when people call you foul, disgusting, and grotesque. Because that's exactly what you are when you shit where you eat. Pretending it's not, because of beliefs, is simply to be disillusioned about the way oxymorons work.

And let's drop the excuses. If it were a few bad eggs, well, they'd be dealt with and fade away into the obscurity of time. It wouldn't be a weekly, monthly, year after year event...whereby the only thing that seems to be true is your inability to believe that shitting where you eat is a bad thing.

And that's nobody's fault but your own.