On Dave Chappelle and "Gender Realism" 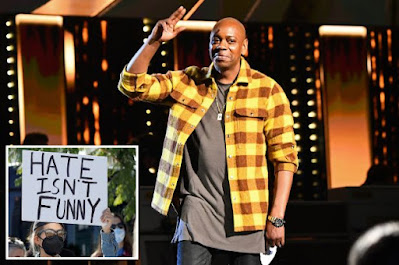 The Economist published a piece on Dave Chappelle's "gender realism." The article is behind a paywall, so, of course, I couldn't read it. But the term "gender realism" stoked my ire.
Look, if you think biological sex is purely binary -- man and woman, male and female, you're simply uninformed and, most likely, scientifically illiterate. That's on you. Not me. Not anybody else.
Look, I get it. You were raised not questioning how the world works and you never cared to learn. That's fine. But, when it comes to biological issues -- don't get up on a pedestal and pontificate ignorance. Nobody wants that. Go out--read the up-to-date research--then get back to me.
Gender is, for the most part, a social construct. There are tons of anthropology studies done on it as well as gender identity and gender representation in different cultures/countries across various time periods. Not hard to find. Lots of peer-reviewed papers are published all the time on this subject.
The biological sex of the species, specifically, has to do with basic genetic science, in which case we look to the number of stable chromosomal karyotypes in the genome.
Geneticists acknowledge that there are currently 6 cataloged biological sexes in the human species that are stable, but there could possibly be more. The number of permutations that a karyotype can have is quite vast, so not every possible combination has occurred in nature. There could be more than six -- one's we simply haven't discovered yet.
And it's not an A or B proposition. Sex isn't binary. That's not how the science works. That's not how genetics works.
It's more like molecules. You change a chemical component, add two oxygens to a hydrogen, and you have a new molecule altogether. Walla, presto...water is made!
Biological sex is like this. You're not adding more male or more female traits... you're essentially getting chromosomal variants of entirely new biological sexes.
It's just that people don't know their science -- and genetics is fairly a new branch of science so a lot of the older generation never learned any of it in school. Not even an overview of the advances in the field.
Posted by Tristan Vick at 7:04 PM