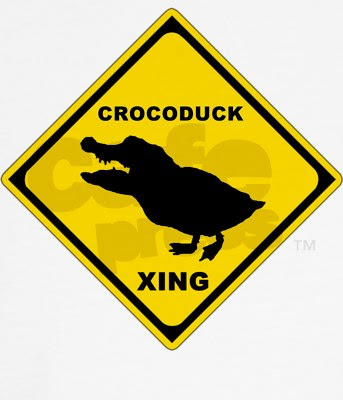 I received a strange mail from somebody named Robert Landbeck who, it seems, fancies himself the author of a new Gospel and an entire new interpretation of Christian faith.
At any rate, he sent me a sample of his writing, and honestly, I can only assume he was either high when he wrote it, or else, is not all there upstairs. Now, I don't say that as an ad hominem, because, well, to be frank, if it walks like a duck and talks like a duck, right?
I base my judgment off the fact that after a few pages of rambling not a single coherent or reasonable sentence was uttered, not a single idea put forward, not a single argument made or defended. It's just random gibberish. It reads, rather, like a free-form stream of consciousness poetry exercise where a person just writes down the first random thoughts that pop into their mind. He sent me a link to a website where he is offering an entire book written in this format, but if there are two things I despise in writing it's 1) not having a point, and 2) stream of consciousness style blathering.  Good for a creative writing poetry class, but that's where it should stay.
Yet, by my reckoning, anyone who would even take the time to write a book length piece in such a style must either be stoned out of their minds, or as I mentioned above, their minds must work entirely differently than your average Joe. Of course, I may be wrong, and Robert Landbeck (which may or may not be a pseudonym) may be the most misunderstood poet of our generation (or of any generation). But for some reason, which I can't put my finger on, I highly doubt it.
Below I've included the piece he shared with me before I went to his website to see if it ever came to a point or damn conclusion, and it never does, so don't say I didn't warn you.
As usual, my commentary is in red. He begins by writing the following:

What science, religion, philosophy, theology, psychology, Hawkins [sic] or Dawkins [sic] thought impossible has happened. History now has it's [sic] first fully demonstrable, [sic] Christian proof for faith. And coming  from outside all existing theologies, clearly has 'tradition' in the cross hairs. To test or not to test, that is the question and measure of ones [sic] 'rationality'.

Instantly he has misspelled Stephen Hawking's surname, and then he neglects to add a comma after Richard Dawkin's name. Having stated the impossible has happened, we must wonder, what is this so-called impossible event? He goes on to inform, History now has its first fully demonstrable Christian proof for faith." Well, I admit, that would be rather impressive, perhaps not impossible. Not very plausible, however. Even so, what is this fascinating proof he speaks of? He continues, "coming from outside all existing theologies, clearly has 'tradition' in the cross hairs." This confused me, because at first I thought he was defending 'Christian tradition' by claiming it now has a proof--but apparently I'm mistaken.
He ends the first paragraph with a brilliant non sequitur, "To test or not to test... is the measure of one's rationality." Great line, but it's unrelated to the rest of the paragraph, nor does it serve any purpose to conclude any prior point, of which I'm still trying to figure out if there was one. Finally, he doesn't clarify what 'tradition' he speaks of, but even so, let's not fail to notice that he actually negates his entire purpose by contradicting himself.

"The first ever viable religious conception capable of leading reason, by faith, to observable consequences which can be tested and judged is now a reality. A teaching that delivers the first ever religious claim of insight into the human condition that meets the Enlightenment criteria of verifiable, direct cause and effect, evidence based truth embodied in experience. For the first time in history, however unexpected or unwelcome, the world must contend with a claim to new revealed truth, a moral wisdom not of human intellectual origin, offering access by faith, to absolute proof, an objective basis for moral principle and a fully rational and justifiable belief!" And it's called The Resurrection!

The second paragraph starts with a reiteration of his prior statement that there is a proof. But instead of detailing what this proof might entail he just re-words his assertion that there is a proof, and adds some catchy sounding jargon, such as, "viable religious conception" and "leading reason, by faith, to observable consequences," although, I'm fairly certain there sentences are not coherent because, A) they don't refer to anything and B) they aren't in support of anything since they are just a rephrasing of his initial point (if we can even call it that).
Next he mentions something called "Enlightenment criteria" although he doesn't explain what that is or even means, other that to say it has something to do with "verifiable, cause and effect, evidence based truth." I wasn't aware there was any other kind. At any rate, he continues on, saying, "For the first time in history... the world must contend with a claim to new revealed truth, a moral wisdom not of human intellectual origin..." But here is is major blunder.

Two things actually. First, I doubt it's the first time in history anyone has claimed to have a 'revealed truth' of some kind, in fact, the entire idea behind revealed religion, such as Islam and Christianity, is that they are touted as "revealed" faiths which contain "revealed" truths. Secondly, is the moral wisdom he speaks of is not of human intellectual origin, then whence does it come from? Call it a hunch, but could it possibly be "revealed" by something not human, or maybe it comes from the great abyss beyond all knowing (the same place most of these ramblings probably originated, one would assume).

If confirmed [sic] and there appears a growing concerted effort to test and authenticate this material,  of which I am taking part, this will represent a paradigm change in the nature of faith and in the moral and intellectual potential of human nature itself;  untangling the greatest  questions of human existence: sustainability, consciousness, meaning, suffering, free will and evil. And at the same time addressing the most profound problems of our age. [sic: fragment]

Who might it be, I wonder, who is taking the bare minimum effort to test and authenticate this material? In order to be considered "authentic" it has to have a referent in reality, and thus far all we've learned is that it (supposedly) comes from someplace of non-human origin and is magically revealed to us. Which is sort of like saying "God speaks to me." To test this one merely has to adjust the tinfoil they wear on their head to see whether or not the signal comes in any clearer.
Whatever it may be, Robert Landbeck will be sure he is taking part, and more importantly, it will spark a paradigm shift in the nature of religious faith and the very intellectual nature of humanity! Wow. Sounds great! Except, we still don't know what it is he's talking about, because he still hasn't told us. Maybe he dug up some gold tablets and translated a secret Da Vinci message ala Joseph Smith.

Never mind though, because it's apparently not important enough to explain, but whatever it turns out to be, he promises, it will give us the answers to sustainability (of what exactly we aren't quite sure. Maybe he means natural resources? A renewable energy source? An afterlife? All of the above?), of consciousness (wow, because I was worried there for a moment), meaning (meaning of what? The meaning of life perhaps?), suffering (good to know we'll finally get answers with regard to this), and free will (wow, neat).

While the religious won't be happy looking into their theological abyss,  what of those who have claimed to be of an Enlightenment [sic] mind?  For if they are unable to appreciate this change in the historical faith paradigm, to one that conforms precisely to a criteria subject to direct evidence and confirmation, then their own 'claims' to rationality are no better then [sic] those religious illusions they find so abhorrent.

Oh, yippy! The theological abyss makes its appearance! I take it that this is the surprising climax of the piece. Then he talks about some random, meaningless stuff, about the paradigm shift, and something about some claims to rationality being no better than religious illusions. It sounds as if he ran this through a random philosophical essay generator and came up with some sophist sounding quackery. Either that or his train of thought simply derailed.

The tragedy for humanity will be if religion, skepticism and atheism have all so discredited the very idea of God for us to re-imagine, discover and experience just how great this potential is? [sic: ultimately a fragment]

Wow! What a powerful conclusion. He leaves us hanging with a big philosophical question! Stunning, simply stunning. I'll never be the same for having read it. It's both profound and meaningless all at the same time!
Normally I wouldn't bother even replying to such mindless drivel, but I was sort of bored, and felt I needed to share with you all the ignoranity (my word for ignorance multiplied by insanity) which is polluting the world at this very moment. Now, I'm not suggesting locking these nut jobs away in a padded room somewhere, that is, unless they become dangerous, violent, or become a nuisance to others. But I will go as far as to hold to my elitist opinion that these people should be taxed for the oxygen they breath, because, hey, thinking people need to breath air too (you know, to actually supply oxygen to the brains they are using). Do stupid people ever consider it would be a humanitarian thing to do? You know, just stop breathing. No! They're all a bunch of inconsiderate A-holes. Yet I digress.
Needless to say, don't bother yourself with "The Final Freedoms" by Robert Landbeck, because it's basically the insane rantings of a loon--or maybe the most misunderstood poet in all of history. I guess only time will tell.
Posted by Tristan Vick at 12:46 AM