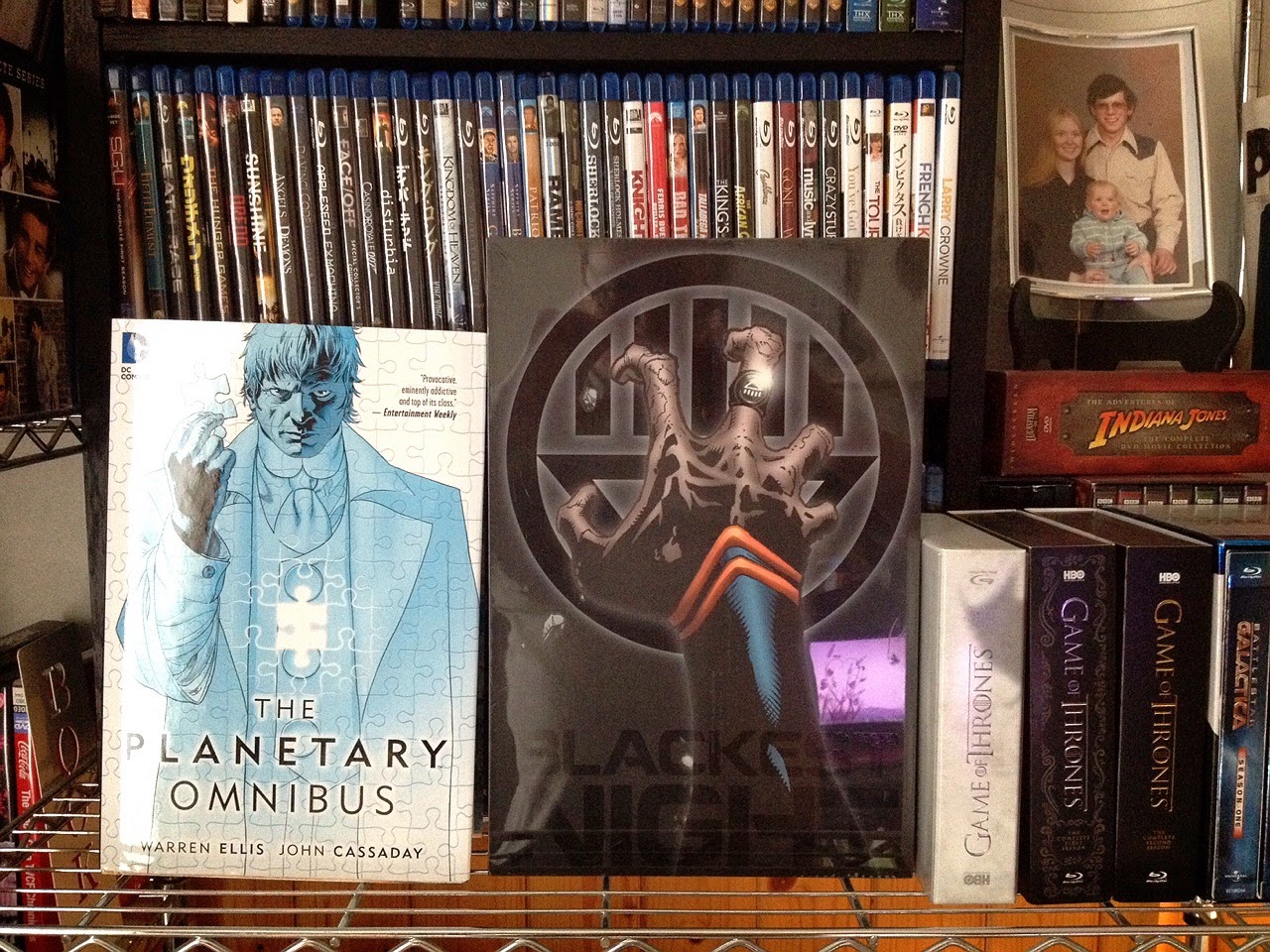 I am taking a break from blogging about religion and related philosophical questions for the rest of this month, so instead of just leaving a void of nothingness in place of your regular broadcast, I thought I'd fill it with the white-noise of my other unrelated ramblings; in this case a review of the graphic novel Planetary.

A decade in the making, Planetary, a comic series written by the brilliant Warren Ellis and drawn by the unlimited talent of John Cassady, began in 1999--the year I graduated high school.

Due to numerous delays the series wasn't completed until 2009. But now the massive 864 page omnibus collecting the complete saga along with some bonus team-up issues and specials is now available. Needless to say, I burned a hole in my pocket faster than you could say "shut up and take my money!"

Over the past several days I read it, slowly. All I can say is the wait was well worth it. This has to be my all time favorite graphic novel. It's less pretentious and wordy than an Alan Moore comic (although I love Watchmen and V for Vendetta), and it doesn't try to be gimmicky like a Jeph Loeb story (even as Superman for All Seasons and Batman the Long Halloween rank up there with the best of them).

If I were to describe Planetary in one word it would be: scope.

The story has scope. It takes it time, it builds up a great big mystery in layers, where each story is a stand alone piece of a larger whole, but how that piece fits into the great scheme of things one never knows. At least no until the very end.

To tell a story like this you have to have the whole thing in your mind. You have to take your time. Even if it takes a decade.

This is a story which stays with you long after you've read it. In fact, you can't quite view comics and graphic novels the same after reading such a story because this book sets the bar so high that everything else is always just sub-par.

I can only think of a few exceptions that rise to the challenge: Blackest Night by Geoff Johns and Ivan Reis, the aforementioned Superman for All Seasons and Batman the Long Halloween by Tim Sale and Jeph Loeb, Alan Moore's Watchman, Frank Miller's Sin City, and Art Spiegelman's Maus. As subjective as comic book taste is, as most art tends to be, most will tell you the above graphic novels are the creme of the crop, plus or minus a few others.

But none of them, in my opinion, can hold a candle to Planetary.

Planetary is hard sci-fi, but it has a dry humor and a charm to it that dulls the otherwise razor like edge to the weight of the story. The characters are charming, original, and well rendered.

In fact, the stand alone stories which expertly build into an epic climax is so rewarding that you find yourself going back to re-read everything and see how it all fits together. Precise. A book with scope.

I've rarely felt so rewarded by a book, graphic novel or otherwise, once I've closed the last page. That sense of gratification, of having gone on a journey through splendid worlds that blend the best of 50's science fiction with modern concepts like quantum foam and the multiverse so well that it's hard not to fall into the story, as if you were really there watching things unfold, between the empty spaces of reality--or the bleed, as Elijah Snow would inform us.

But all this is fine and dandy. You're still probably wondering what is Planetary, exactly?

It's a story about a mysterious super-powered man named Elijah Snow, who suffers a bout of amnesia when he suddenly is contacted by a secret archaeological agency named Planetary. Planetary's field archaeologists include Jakita Wagner, a woman with Wonder Woman like strength, and an informational black hole named Drums, who can speak to machines and even see the digital code of genuine magic.

Recruiting Elijah Snow, the three investigate a series of strange and bizarre artifacts, including a multi-dimensional space craft, ghosts, an ancient society of superhuman guardians, a sleeping quantum computer brain, a radioactive woman, giant ants each the size of a city bus, alien beings, time travel, and many other strange and wondrous things.

Behind all this weirdness is an even more secret and strange group who seem to be pulling all the strings as they shape the course of human history. A group simply known as "The Four."

And, well, that's as much as I feel comfortable telling, since the rest is, as River Song would say, spoilers.

If you get a chance, I highly recommend you read Planetary. Even if you're not a fan of comics, there is something unquestionably special here.