Syntax Tree, Parsing, and Quantifiers: Breaking Down "There are no absolute claims" using syntactic analysis

A group of symbols, or words, collected together is called a 'string' in linguistics. The process of analyzing a string of symbols is called parsing or syntactic analysis.

The traditional grammatical exercise of parsing, sometimes known as clause analysis, involves breaking down a text into its component parts of speech with an explanation of the form, function, and syntactic relationship of each part.[3]

First I began with writing my root sentence, expressed as:

"There are no absolute claims."

For the second step I labeled the parts in the string.

The third step required writing it out in bracketed form.

The last step is to draw the actual tree.

For convenience, I used the Syntax Tree Generator online to generate a tree graphic that I could easily use for including in this essay. But it is just as easy to draw by hand. 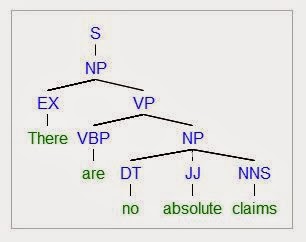 There you have it! The basic skeleton of the underlying syntax of this specific string.

This helped me look under the hood of the grammar, so to speak, and what I discovered was interesting.

The reason is because it is what linguistics call context-fee grammar. It's without the surrounding architecture of any additional grammar, so any additional meanings cannot merely be assumed without first supplying an overarching context. More on this in a bit.

The term "no" in this string is what is called a determiner. There are many types of determiners, but this one is a specific type called a quantifier.

In grammar, a quantifier is a type of determiner, such as all, many, no or none that indicates quantity. These items have been argued to correspond to logical quantifiers at the semantic level.
Thus, taking into consideration the quantifier (from the 'no' DT), the quantity of absolute claims, according to the sentence, number zero.

As such, this is a statement about the number, or quantity, of absolute claims here, minus any context. It has nothing to do with whether or not absolutes, as theoretical constructs, can exist. That is not my interest. My goal here was merely to focus on whether the above sentence is unto itself an absolute statement in the sense that it would hold as absolute true under all conditions, always.

As a context-free grammar string, in order to know if the statement is an absolute claim itself we require more than just the underlying syntax. We require a grammatical context to derive the conditions which make it true under all conditions, always (i.e, universally true), that "there are no absolute claims."

Again, without this qualification of conditions, the sentence is merely a sentence about the quantity of absolute claims minus any context.

My mistake was to assume there is an implied context to the term "absolute" in the original sentence, and there simply isn't. At least not one which can be derived from the syntax, as the parsing tree so aptly demonstrates for us.

In conclusion, the statement "There are no absolute claims" is context-free grammar string, which expresses the quantity, not conditions, of the noun in the noun phrase. As such, we would require a greater context for defining "absolute" as an axiomatic absolute truth which holds universally.