The other day I posted an article about the five things that Jesus should have said but didn't that would have made him a moral teacher.

As it turns out, Jesus wasn't a moral philosopher. He never preached anything original in terms of morality or ethics. He merely repeated Jewish axioms. In my view, someone who is deeply concerned with morality and ethics, this amounts to a big failure for the so-called perfect and sinless man who is held by Christians to be the upright moral paragon we must all aspire to. But there I go, trying to be all logical and what not, thinking a true paragon of morality would have something to say on the subject. Because, in my mind, a politician who doesn’t mention politics isn’t very much of a politician, is he? I’d say the same is true of moral philosophers, of which Jesus clearly wasn’t one.

In response to the article a Christian girl who goes by the grammatically incorrect handle "Jesus Daughter" decided not to read my article but spam me—presumably because I am an honest atheist who shares my views here on the public domain of the world wide web. Of course, letting bygone be wouldn’t be enough for an empathy lacking religious person.

So her first response was rather terse, as you can see by the screen-cap I took. 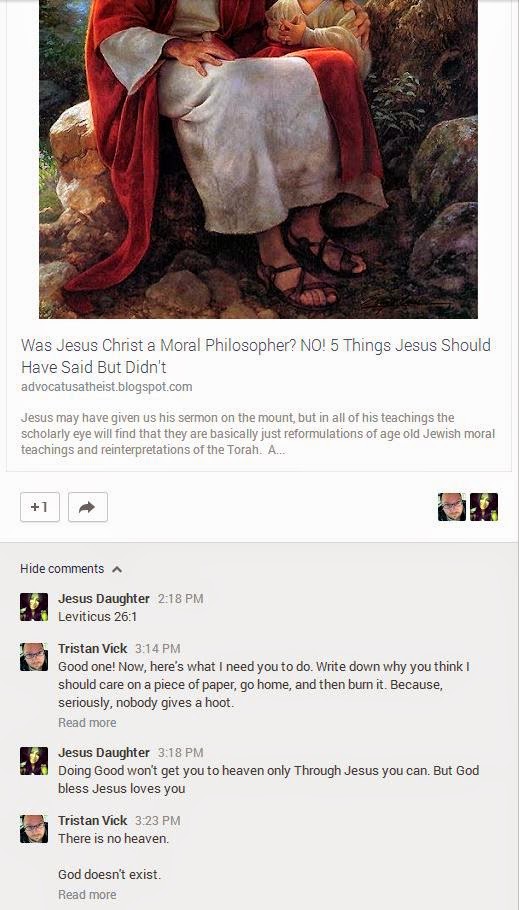 As you can see, my response was a bit sarcastic. The reason for this is simply that I truly despise spammers. If you don't care enough to have a cordial conversation with someone it really doesn’t make sense to spam them with Bible verses, because that amount to little more than you being a dick. Perhaps she should re-think her name. “Jesus’ Dick” would be much more suiting of someone with her mentality.

The second reason I felt sarcasm was due was because of the content of Leviticus 26:1, which read in full states:

"Do not make idols or set up an image or a sacred stone for yourselves, and do not place a carved stone in your land to bow down before it. I am the Lord your God."

What does that have to do with anything? I have no idea. My article talks about morality. There was nothing about religious ritualistic worship or theological doctrines of any kind. I was merely observing that Jesus never taught anything that could be considered an original moral or ethical teaching that didn't already exist in Jewish culture and tradition, or in other religious philosophies outside of it, for that matter (i.e., Buddhism & Hinduism).

Why do Christians think spamming non-Christians with specifically Christian writing will work? Do they honestly think we haven’t read any of their literature? Maybe they do. But such a view is rather naïve, if you ask me. Perhaps there is a reason there are so many non-believers. Maybe we have read the Christian writings and found them wholly unconvincing. It seems a rather bad strategy, if you ask me. It seems like the strategy of a person who hasn’t read any other works of literature and who mistakenly think the Bible is the final arbiter on wisdom.

So I called her on her quoting an unrelated bit of scripture, and her immediate response wasn’t to ask me why I thought what I did, or how I came to such a conclusion, but her response was to double down and proselytize to me. Proselytize to me! Me! The guy who calls himself The Advocatus Atheist! Literally, an advocate for atheism. And she wants to proselytize to me?


My friend Ashley calls this need to proselytize "masturbatory verbal Jesus diarrhea" talk because it's messy, gets all over everything, and nobody really wants it but the Christian doing it just needs to get it all out because it feels… so… damn… good. The fact that Christians can't seem to realize this often bothers non-Christians to the nth degree seems to suggest a real lack of empathy on their part.

Seriously, who goes around telling people what they ought to believe all of the time apart from the extremely religious?

Nevertheless, Jesus Daughter dismissed my position completely, which really torqued my chain and gave me the reason I needed to respond to respond in kind.  At this point I figured I am either dealing with a troll or a complete ignoramus. As my brother-in-blog Mike Doolittle of the A-Unicornist asked, "Dude, why feed the trolls?"

I simply replied, "Everyone needs a hobby."

So out of sheer morbid curiosity of how thick her skull really was I continued to engage Christian Spammer Girl.

Then it dawned on me. Maybe I was going about it the wrong way. Maybe she was genuinely confused as to what my position was, having not taken the time to figure it out on her own time, so I restated it by explaining in my own terms that her beliefs didn't hold meaning to me because I didn’t hold them. 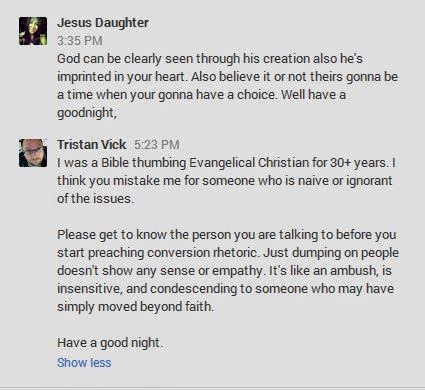 She said heaven was real and so was God, so just to be real clear, I informed:

Hey, I’m glad to share other points of view, but that didn’t seem to work either. It almost was as if in her mind there could be no such thing as an atheist. In fact, I know it, because her insistence was that I was a God denier made it clear. She didn’t say that, but when you ignore what the atheist believes and keep supplanting their beliefs with your own, implying they are worshiping false things, and that they are in need of saving, and continually ignore them correcting you when they say that they honestly don’t believe—well, in not so many words you are, in true condescending fashion, calling them a denier. Now, this bothers me, because denial is simply the inability to accept what is obviously true. I don’t have to tell you that when it comes to God, and the claims of believers, there is hardly anything that is ever so clear cut and obvious. But I digress.

At this juncture Jesus Daughter decided to tell me that God was evidenced by all of creation (but not really) and that Jesus was imprinted on my heart (which made me wonder if it was anything like Jesus being imprinted on the face of a piece of toast).

This time I wanted to send her the clear message that I didn't appreciate her continued rudeness. I gave her several chances to have a real conversation, to ask me about my beliefs, but she continued to pretend that she was right and I was wrong without ever having asked what I believed in the first place. It takes a special kind of person to believe everyone else is automatically wrong when they don’t even know what it is the other person believes.

I think my friend Ashley may have been right. This girl just wanted to spew masturbatory verbal Jesus diarrhea everywhere because it feels so good to get it all out.

Of course, immediately after scolding her I realized that she might simply not understand the atheist position (like, at all). She might not know what it is or what it entails. She might not even know that, much like her Christianity, there is a full assortment of atheists who hold a diverse set of beliefs. That atheists, as individuals, all have different experiences and reasons for why they cannot bring themselves to believe.

Luckily, I have recently published a book collecting the stories of why people do not believe in God, and I figured she could benefit from reading it.

(After all, all is fare in spam and war.)

So I sent her the link to my new book Beyond an Absence of Faith, which I co-edited with Jonathan M.S. Pearce.

She responded this morning.

She suddenly starts talking about her "old life" as if I knew what that meant. She mentions how "meaningless" it was, mind you, all out of context because she hasn't so much as offered a link I could follow to learn about her as a person. So far, she is just a random over zealous Christian spammer hiding behind a pseudonym.
Whereas, if she had clicked on the link to the original article, she'd learn a lot about me and my past as a devout Christian (which is why I brought it up--knowing she hadn't actually read the article or followed the link to my blog). Heck, if she would have clicked the Amazon link to my book she would have been able to read my author bio and learn something about me. But no, just random vague comments about Mooby the golden calf—and, well, pretty much nothing.

So I responded by telling her that what she was doing was rude, and I informed that my suggesting the book was to help her learn other perspectives and points of view. Gain a bit of empathy, if you will. The moral advice comes free. I hate to have to correct people, but rude is rude. So why not reserve the prosylatizing for… never… and start to engage people in genuine conversation?

I felt that this was worth saying because Jesus Daughter’s slapping down a Bible verse like a full flush, as if it were meaningful, really made my eyes roll. In the greater scheme of things, that’s not meaningful at all. Showing compassion, empathy, and trying to understand others is meaningful. Being loving, that’s meaningful. Being a good listener, also meaningful. Finding your own purpose in life, extremely meaninful endeavor. Telling people what they ought to believe on the other hand, that’s not trying to understand anyone or anything—there’s no meaning in it. What it means is you lack empathy. It’s simply a way to have your cake and eat it too, even though you’re at someone else’s birthday party you’re at and it’s not your goddamn cake. Don’t be that person. If you take anything from this little spiel, I hope it’s this: make your words and actions count for something. Go forth and be that person.

In the meantime, if you have any stories about bizarre encounters with peculiar people, feel free to share them in the comments section below. Until next time, I’ll leave you with my favorite closing:

Live well and be wise.