Why I won't Misgender Caitlyn Jenner or any other transgender-person

Let me get up on my soapbox here for a minute.

Recently I posted this meme on my personal Facebook timeline. 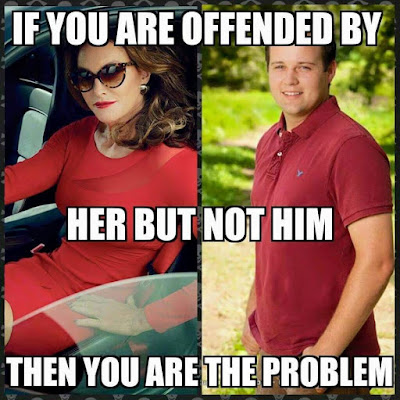 It instantly sparked a long debate in the comments section of the post, but not for the reasons you'd think. Nobody was talking about the incestuous scumbag Josh Duggard and how he raped his 4 year old sister until she was 12 or about how his parents helped conceal the terrible truth of it and cover up years of molestation within the family.

Rather, to my dismay, it seemed people were more morally outraged by a person changing their gender identity.

First, never mind the fact that a person having a sex change or who changes their gender has nothing to do with you and is completely a personal matter. What's more, it isn't hurting anyone, but people still want to misgender Caitlyn Jenner and say that because she hasn't had a full genital reconstruction she isn't technically a woman yet and so stubbornly dismiss her coming out and continue to pedantically refer to her as a "him" even after being corrected.

This dismissiveness isn't just rude and insensitive, which it totally is, but in this case it is dehumanizing and immoral. Allow me to explain why.

Within human society, both Western and Eastern, sex and sexuality have been separate for a long time. Gender identity is tied up with sexuality where as the biology of sex isn't.

I think people get confused about pronouns because traditionally speaking it's hard to change our thinking about solid forms, like biological sex. Don't even think about trying it with the more nebulous concepts of self-identity and individuality which come with them their own unique philosophical challenges.

The way I often try to explain it is that anatomy (having the parts) is merely aesthetic. Structural. But that the identity, the mind, the soul, the person as they feel themselves to be doesn't change because they have a certain anatomy.

Gay men are not women even though they like (i.e., are sexually attracted to) the same sex. Thus, it's obvious to me, gender is separate from biological sex.

It seems this is an easy concept for most to grasp without problem even though many have lots of trouble accepting that trans-people, whether transgender or transsexual, often end up choosing one gender identity over another. Even though this is not always the case, and even though gender identities vary and can blend.

When I first came to Japan I was shocked by how many trans-people were on national television and talk shows. After a while I fell madly in love with Haruna Ai, one of Japan's most famous women. I didn't care that she used to be something else. I had only ever known her as a woman, and that's what she wanted to be, and she's beautiful and funny... and her light bubbly television personality won me over instantly.

I think the best thing to do is to try and get comfortable with the notion that there are more than just two genders, even as there seems to only be two sets of biological sex (or more accurately three since transsexual is technically a third biological sex, strictly speaking). And it's probably not a good idea to gender stereotype people into just two categories--which is a very black and white way of seeing the issue.

Society compounds the problem when we assign rigid gender roles to one gender and not another and don't allow for any crossover or variance or any leeway in who we see carrying out these preselected gender roles. When someone tries to crossover, or there is variance, people's first reactions seem to be to gender stereotype. I think we have to be mindful that this can be damaging, not only to the person who it tries to crush into a single form they don't identify with but it also insolently dismisses that which they do identify with. It's worth noting that such prejudice has never benefited humanity and only seeks to hold us back, as has racism, homophobia, and xenophobia. Now we can add transphobia to this notorious list of myopic and callous thinking that seems to retard society as a whole.

I'm sure that many of you may all well know all this, but I am explaining it here for the benefit of others who may still be confused about why using an outmoded pronoun for a trans-person might be insensitive and rude.

Additionally, medical science has been well aware of the blurred lines where biology and gender identity come into play for a long time.

I am reminded of an episode of the medical drama House, M.D. called "Skin Deep" where the female super model turned out to have a very rare condition called *complete androgen insensitivity syndrome, and even though she had all the biological parts of a female, she was technically male.

Society doesn't seem equipped to even talk about such things since people are so frequently poorly informed. Which is why I felt this little rant was worth having.

I think the pedantic nature of people using certain pronouns to misidentify or misgender someone is terribly insensitive.

I think if people started calling me a "she" even though I think of myself as a "he" it would seem rather insensitive, especially after I was patient enough to point it out to them that I don't think of myself as that particular thing.

My body parts never really come into play. It's not a question of what gear I am packing. It's a question about how I see myself and how I feel on the inside. The true me. The real me. Knowing this, I can empathize with Caitlyn Jenner and those who face such obstinacy from society at large.

Let's think of it another way. Misgendering someone would be a lot like calling a gay person straight just because you don't want to accept other sexual preferences than your own, and it comes off as being rather condescending and rude, not to mention completely dismissive of the person's feelings and who they are as a person separate from their basic anatomy--which, again, has nothing to say on gender.

In this case, gender stereotypes are outmoded, and I am perfectly fine accepting people for who they are.

We have to respect people as they see themselves and learn to love them for who they are lest we devolve into complete bigotry due to our inflexibility to adjust our views and update them accordingly. As Bob Dylan sang, the times are a changing.

I don't think we should misgender people because we judge them according to the inflexible standards of society, a society which is not well informed on the topic and which holds to definitions from a bygone era when nobody knew the difference anyway.

It seems that if you want to update your knowledge, you have to put the pseudoscience aside. If you want new cutting edge medicine, you have to put away the crackpot alternative medicine and get with the program. I would say the same about gender, sexuality, and sex. If you want to understand these things as they truly are, you can't hold to an outmoded rule book that doesn't care to see these things in any terms other than black and white.

That's why holding to the "he" or "him" pronouns for Caitlyn Jenner is insensitive and wrong. It becomes offensive when people are corrected on it but continue to misgender the person anyway.
Posted by Tristan Vick at 12:37 AM