In Response to Joyce

The Imperfect and Immoral Teachings of Jesus Christ was an article I wrote in what, admittedly, was a rather crude attempt to consider some of the character flaws and moral failings of Jesus Chris. Needless to say, the religious scholar Hector Avalos did a much better, and far more thorough, critical analysis of Jesus Christ's moral flaws and failings in his book Bad Jesus: The Ethics of New Testament Ethics.

At any rate, having re-read my original article I still stand by my criticism, although I now see that I could have worded it much better -- yet perhaps not any less scathingly. That said, it remains one of my most read and consecutively commented upon articles on Advocatus Atheist and as a new comment popped up in my feed today, I re-read some of the other comments and found one by Joyce Clemmons which I was never able to properly respond to because of the privacy setting wouldn't allow me to write a direct reply.

Having re-read her comments, I wanted to address some of them here, as I think some of her comments -- although well intended -- largely miss the point I was trying to make. 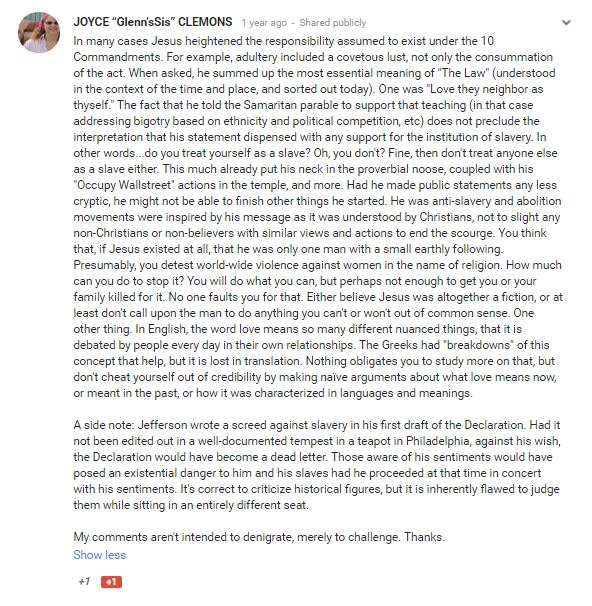 I agree with Joyce's comment that Jesus was basically re-interpreting the 10 commandments. What I disagree with is that he stressed, or heightened the moral responsibility to abide by them.

Although Jesus did say "love your neighbor" and although she is right in saying this is also the reason people, including good Christians, decried slavery saying if you would not want it done unto yourself then don't ask for it as a right -- would put Jesus as implicitly against slavery -- my point was that this assumption is merely a logical progression stemming from our own moral understanding of slavery being bad.

Someone who didn't think slavery was innately bad, i.e. morally wrong, wouldn't necessarily think to include slavery as something they wouldn't want to be done to themselves. Case in point, if they believed they were destined to be a slave, they may have felt that it was their God-given duty to fulfill their lot in life as a dutiful slave. In other words, slavery to them may have seemed a brute fact of life. There were class systems to consider, wealthy and elite, merchant, beggar, and slave. It would have been a necessary part of their existence to fit into one of these categories. Because that's simply how the world worked back then. History bears this out.

So there is no direct link from the Golden Axiom to the admonishment of slavery since there are ample reasons one who subscribed to Jesus's own moral outlook could still defend slavery.

The fact remains: Jesus not admonishing slavery or making a point to decry the practice appears to be part of the context of his views being largely couched in the historical context of his day. Which is why he appeals to Old Testament law when asked about slavery in Luke, making the implicit statement that he actively supports the practice by NOT decrying it when he had every reason, moral or otherwise, to do so.

And that was the gist of my point. Jesus, if we are to assume him a moral philosopher of any caliber whatsoever, would have to make an explicit statement on the subject decrying it's practice as immoral for us to say -- hey, this guy was a good moral teacher. But this we do not find. Rather, the scriptures give us fine examples of Jesus going along with the practice and even using it in his moral parables without so much as a mention of its immoral and unethical implications.

When Joyce mentions I am against world-wide violence against women. This is true.

The reason Joyce knows this is because I have spoken out against the mistreatment and inequality of women numerous times. I support causes that seek to empower and give women access to education in developing nations. But I think her example backfires. Because whereas I can do little about it without actively leaving my home and going out into the field and fighting the good fight, (ignoring all my other responsibilities as a father of two and as a teacher -- but never mind this triviality), I have made it expressly clear that I detest the abusive treatment and violence against women wherever it is found.

And I just did it again, here.

But nowhere does Jesus Christ make it expressly clear that he detests the abusive treatment and violence against slaves or the practice of slavery.

Rather, he admonishes people not to beat their slaves so severely that they lose their teeth or eyes, but again, this is just a reiteration of OT laws which most abiding Jews would already be practicing.

Think about that for a moment.

Which is why we can deduce that Jesus implicitly supported slavery.