Even as Japan is mainly a secular society which prides itself on its "freethinking," a term most Japanese throw around loosely, over the years I have found that Japan is infested with age old superstitions and ritualized customs which have seeped into mainstream life.


Partly this is due to the fact that the contemporary culture of Japan is fused with a 3,000 year old history. When you have had certain customs or traditions ingraned into society for so long, they aren't thought of as "superstitions" so much as they are traditional Japanese practices which reflect their ancient heritage.


One such tradition is called Yakudoshi.

Yakudoshi refers to the belief that there are certain ages in one's life where their bad luck increases and there good luck diminishes (as if good luck and bad luck were forces that were intertwined--like the yin and yang). Thinking about yakudoshi in terms of the Chinese philosophy of yin and yang makes sense considering that, in Japan, yakudoshi is part of the official religious practice of the Ommyodo school of philosophy. Ommyodo literally translates to "The Way of Yin and Yang."


One of the best online Encyclodpedias about Japan is the Japanese Cultural Center of Hawaii. On there page about Japanese traditions they state that


Bad luck ages are referred to as yakudoshi, with yaku meaning “calamity” or “calamitous” and doshi signifying “year(s).” These years are considered critical or dangerous because they are believed to bring bad luck or disaster.... For men, the ages 24 and 41 (or 25 and 42 in Japan) are deemed critical years, with 41 being especially critical. It is customary in these unlucky years to visit temples and shrines to provide divine protection from harm.... The equivalent yakudoshi ages for women are 18 and 32 (19 and 33 in Japan), with 32 thought to be a particularly hard, terrible or disastrous year.

My Japanese wife recently asked here friends what they thought about this tradition, and one of her friends, an American woman married to a Japanese man, had this to say about the yakudoshi ritual:


It was my Yakudoshi last year, and my mother in law and I had many disagreements about its customs. I refused to go to go to a shrine and be cleansed, because it's just creepy and unnecessary to my western mindset.

Another friend of my wife's informed that her mother-in-law waited until after her yakudoshi to buy a car. Supposedly because she didn't want to buy a new car and then have the bad luck of wrecking it.

There is even an iTunes calendar app to help you keep track of your yakudoshi! After all, you wouldn't want those unlucky years sneaking up on you! 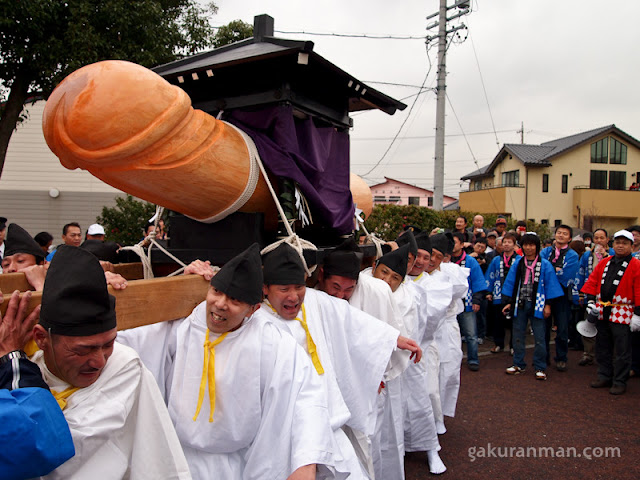 This superstition of good-luck/bad-luck periods in one's life, however, is not so different from other long held Japanese superstitions and traditions, such as blood type determining a person's personality type, or the fertility rituals in which a giant penis is paraded around the local rural communities. Most of them are odd, even downright absurd, if not plainly bordering on the ridiculous. Many Japanese citizens--the same Japanese people who pride themselves on their status as "freethinkers"--will often blindly accept, with unquestioning ease, these age old superstitions and rituals.

Mainly, I think, they accept it without protest because they view these age old customs and rituals as an inbuilt part of the Japanese cultural identity. Strangely enough, many people seem to not only practice them out of tradition but also seem to believe in them. Those that don't believe often still practice them anyway, and when questioned on why they continue to practice useless and erroneous traditions you'll often hear the rejoined, "But it's part of Japanese life, it's part of our cultural identity, it's what we've always done."

Whether or not that excuse is good enough to pardon oneself in the practice of silly and erroneous things which, quite frankly, make a person look absurd--I don't know. For a country often concerned about saving "face" and maintaining a certain decorum, and priding itself on its strong economy, modern lifestyle, health, longevity, and slew of technological achievements, it sometimes seems that many of Japan's ancient customs and traditions are out of place in today's world. But that's Japan for you--a hybrid of the ancient and the modern, the old blended in with the new. It's one of the things which makes Japan truly fascinating for me.
Posted by Tristan Vick at 7:54 PM