Is New Atheism a Religion? Theism vs. Atheism. Which is more Rational? 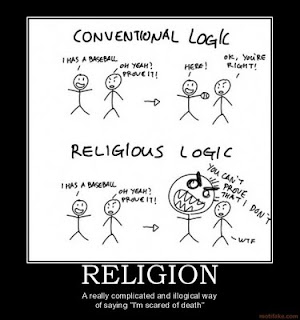 A recent commentor left some statements regarding atheism on my other AA blog regarding his views on atheism. Among the statements he made, he claimed that atheism wasn't the more rational position. That theism doesn't need to prove itself even as it has made the positive claim. And that New Atheism is a religion even though atheists won't admit to that fact.

I think you'll find that these are your typical apologetic statements which many Christians are taught. It's a bit of anti-atheism rhetoric that doesn't actually deal with the claims or try to engage in skeptical inquiry, but merely attacks the other side's position without giving thought to what is actually being said.

Both theists and atheists on both sides have been guilty of going off half-cocked in the past. But my article wasn't about any of this, per se. I was talking about probabilities and why atheism is more rational because there are no convincing reasons to compel us atheists to go from a high probability to a low probability belief assumption. Quite literally so, otherwise there wouldn’t be such a thing as atheists. Therefore atheism remains, at least in my mind, the more reasonable position given the failure for theism to properly (and adequately) demonstrate it's positive claims.

Anyway, that was the gist of my argument.

But let me address some of the other misconceptions as well.

I only said this after a lot of proving, and talk about probabilities along with numerous of examples. You can read the article Is Atheism More Rational than Religion if you want to. I think you'll agree I wasn't denigrating theists by calling them less rational. I was saying that because there are numerous factors which seem to make theism a less rational position to take. Granted, I could be wrong. But read the article for yourself and make up your own mind.

Later my interlocutor went on about "religious logic" vs. "atheist logic." I think he may have misunderstood what I was criticizing exactly when I invoked the term "logic."

In fact, I felt as though he was jumping the gun when he criticized me here because I wasn't saying that atheists are more rational because "religious logic" is bogus.

Of course, I wasn't talking about logical deduction or analysis quite yet. I was more concerned with taking a stance on specific belief propositions. And logic, in this case, comes after you have data to analyze. But beliefs do not require data, or even evidence, simply to be held. And that was my main point.

Belief and knowing are two separate things. And theists usually conflate the two. I doubt they realize they are even doing it half of the time. But I continually have to point this out in nearly every discussion I have on the subject.

Where belief propositions are concerned, I mentioned the fact that it does us well to examine why we have accepted beliefs or not when we are the ones making positive claims about the status of real world objects.

That's why evidentialism plays a big role in how one comes to hold conviction in the belief claims they have accepted as prima facie true. Subsequently, this is also the main reason why New Atheism is *not* a religion and why I tire of hearing such a claim in the first place. It doesn't act like religion, it doesn't function like religion, it is, however, a response to religion.

Of course, it may be the case that religious apologists have misinterpreted New Atheism to be anti-theism for anti-theism's sake on top of pushing strong-atheism simply for the love of not believing in things, and that its zeal arrises from some egoistic desire to be right, rather than being what it really is -- a response to contemporary forms of theism. It only appears to the religious as a form of religion because they don't fully understand what it's trying to do. It's mysterious to them. And, well, in their world that's indistinguishable from religion.


In terms of atheists being the more rational (position) claim, what I was saying was that atheism takes the null hypothesis when the positive claim cannot be corroborated or verified beyond a reason of a doubt. That is, we side with what nature appears to demonstrate to be the case, that is is just a mundane natural world, rather than making up rationalizations for why nature hides her true metaphysical nature or reality from us, as the theist does.

New Atheists, of course, often get chided for pointing this out. It's at this point where the religious like to throw out pejorative terms and call New Atheists worshippers of the alter of science, and label accusations of scientism.

This accusation of scientism arises, in part, I think, because the atheist has taken the time to at least attempt to familiarize themselves with the scientific literature. And in their newly acquired scientific knowledge, they see that the theistic claim is simply not possible in the realm of natural science.

Consequently, saying that your particular brand of metaphysics cannot be explained by science frequently invokes the ire of the religious who say -- exactly. And why should it? And this comes back to our previous point about New Atheists accepting the world as it is, or at least as it appears, and not making undue rationalizations to explain why it isn't some other way imaginable to us.


Now, atheists could very well be wrong in this. When all is said and done, theism may very well be true. What the atheist continually reminds theists of is the fact that there is no evidence to confirm that such a position is valid. If there was, there'd be no contesting it.

On the other hand, atheism doesn't need to prove itself valid as it is not offering an alternative, competing, metaphysical explanation of the reality we observe. It's merely siding with it. As such, it's merely a response to theism. It's simply a stance opposing theism based on the grounds that theism has failed to demonstrate its metaphysical claims about the nature of reality.

One might choose to argue, as certainly many have, that strong-atheism does, in fact, make a positive claim about the nature of reality as we understand it. But, once again, I'd argue that strong atheism is a position of belief. Just as strong theism is. And therein lies the rub. The problem itself is with the nature of belief.

I think rational minded people will temper their conviction with healthy skepticism as much as possible. When it comes to the New Atheists, or any other form of atheism for that matter, a person pushing for strong atheism might be doing so as a counter-measure, or a contra-argument, against theism. Perhaps as a way to try and get theists to be more skeptical of their own claims as well. It doesn't automatically mean New Atheists believe in scientism and are merely being anti-theists for the love of raging on religions. I've met very few atheists who are ardent strong atheists because they simply "believe in not believing" in things. That, in itself, wouldn't be a very rational position to take.

That's not to say there aren't irrational atheists in the same way there are clearly cases of irrational theists. But when it comes to making rational assumptions about the world, vs. striving to be more rational, there is a key difference to be noted between the approaches of atheists and believers.

Rationality, in this case, deals with what we can know. What is irrational, in my mind, is pretending to know things that cannot be discernible, or that you don't have adequate evidence for, or that are defeasible in the way things are when they are verifiable via systems of demonstration, and thus must be taken on a matter of faith.

That's merely affirming a belief. But many beliefs, even mundane one's, even among atheists, are not always rationally held.

That's just the nature of belief.

Atheists merely ask that theists follow through with such claims when they mean their statement is more than a matter of simple belief. Such as "knowing" or being "witness" to things inexplicable. That's when rationalism begins to play a big role in helping to determine whether the beliefs we hold are rationally sound.

I hope that helped to clarify any misconceptions about atheism and New Atheism vs. Theism and what it is I meant when I said, in effect, that atheism is more rational than theism.