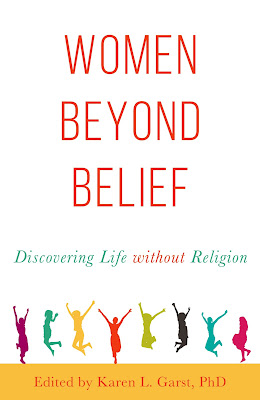 “For me, being an atheist has set me free from ignorance and stifling gender expectations. As a woman, others don’t tell me what my place is; I make my own destiny. I wasn’t created in the Garden of Eden to be a helper to a man. Learning isn’t something to be feared and punished by a control-freak god who values ignorance over knowledge, the supposedly forbidden fruit. It is more difficult to make sense of the world on your own rather than to defer to a book, but it is more honest too.” --Lilandra Ra

Lilandra Ra is a science teacher who was raised in both Catholic and Baptist churches. She is one of 22 women who have written essays about their personal journeys away from religion.

Karen L. Garst has compiled these essays into a book entitled “Women Beyond Belief: Discovering Life without Religion,” which can be pre-ordered on Amazon. If you're familiar with my own publications, you'll know that I did something similar with Joanathan M.S. Pearce, when we published our collection of deconversion stories Beyond an Absence of Faith. So, naturally, when Dr. Garst contacted me about her upcoming book I was excited to read it. It just goes to show you that great minds do think alike.

Dr. Garst informed me that she became incensed when the U. S. Supreme Court issued its decision in Burwell v. Hobby Lobby in 2014. This decision said that because of its religious views, Hobby Lobby, a craft store, would not be obligated to follow the dictates of the Affordable Care Act and provide certain forms of birth control to its employees. “Will we never end the fight for women’s reproductive rights?” Garst stated.

Once again, religion has influenced the laws of our land. Politicians cite their religion in supporting restrictions on abortion, banning funding for Planned Parenthood, and a host of other issues that are against women.

The first leaders of the New Atheism movement that arose after 9/11 were men: Richard Dawkins, Sam Harris, Christopher Hitchens, and Daniel Dennett. They came with backgrounds of science and philosophy and they launched a renewed effort to show people how destructive religion can be and how all Abrahamic religions are based upon an Iron Age mythology, borrowing from other mythologies of the time.

Dr. Garst wants to add a focus on women and the role this mythology has played in the culture of many countries to denigrate and subordinate women. She states that “Religion is the last cultural barrier to gender equality.” And she is right.

More and more women atheists are speaking out. And as we all know, if women (who comprise the majority of church goers) leave the churches, they will collapse and the religious landscape will be forever altered.

I encourage you to check out Dr. Gart's book, as she has received support with reviews by Richard Dawkins, Valerie Tarico, Peter Boghossian, Sikivu Hutchinson and other renowned atheist authors.

If you wish, you may find Dr. Garst’s blog at www.faithlessfeminist.com and you can even pre-order this excellent book which I had the pleasure to read a beta-copy of.
Posted by Tristan Vick at 10:08 PM