A Letter About Your Crappy Beliefs 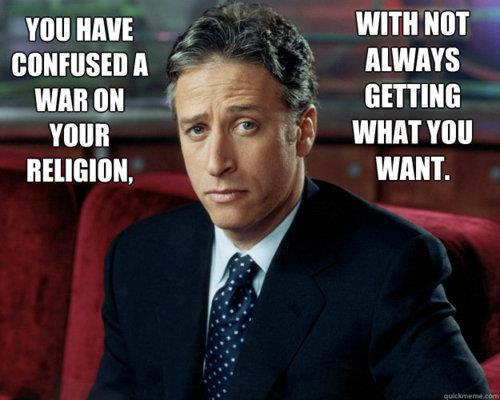 Many religious people say that the things I post about religion are intolerant and hurtful. That the attacks criticisms of their beliefs are disrespectful. As if their beliefs had feelings.

What they really mean, however, is that the logical proofs and reason based arguments I have provided are so crippling, so damaging, to their beliefs, that I have shattered their confidence in their faith. Who am I to tell them what to belief? They say. Heck, I am not telling them what to believe. I am just pointing out the difference between a valid and an invalid belief. If they want to believe in utter crap--that's their choice. But even pointing out that their beliefs consist mostly of heaps of crappy beliefs which are glued together with even crappier beliefs seems to make them squeamish.

The very fact that they resort to flinging ad hominems my way, saying that I am a hurtful, mean spirited, person who's angry at God and has it out for them is merely an admission that they have absolutely no rational comeback to the arguments I have provided. Instead of trying to grapple with the issues they would rather force me to feel as crappy about their crappy beliefs as they do. Crappy beliefs which must be true... even though I just disproved them... and they had no defense. True because they wish to believe it contrary to the facts.

I think the word for this is denial.

Oh, you totally demolished my belief that Jesus was the son of God, but instead of trying to reason through complex arguments like a thinking person, I am just going to retreat into denial, pretend I never heard anything you said, and then call you horrible names so that everyone will know what a horrible person you are.

Very mature religious people. But unlike you, I genuinely do have sympathy, so every time you resort to such tactics I know... you can't help it. It's not your fault. You, just like I was not so long ago, are an unwilling victim of your religious ideology. It's the way you were raised. You grew up believing it because your parents did. And if not, you almost assuredly lived in a culture where that faith was a viable option over a thousand others you've never even heard of.

I understand that you've never had to seriously think about your beliefs for even one minute of one day. I don't expect you to all of a sudden be able to tackle all the great arguments against your faith that have been developed over the past two thousand years. Just stick to the mantra of repeating it's true. Do that as long as it works... until it doesn't.