A deconstruction of the phrase:"Guns don't kill people. People kill people." (The True Purpose of Guns) 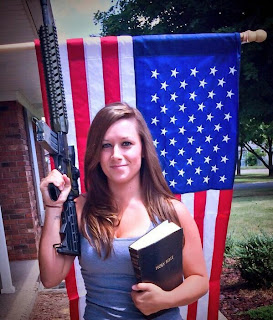 This is a phrase that I've always hated. First of all, it's completely illogical.

Why is it illogical? Because it's talking about design, function, and functionality then making a cross comparison of functionality wherein the initial purpose of it's design has been altered to get a different purpose implying the object's original purpose was not what it was designed for. This makes the statement blatantly illogical.

Design serves function, function serves purpose, and functionality can be manipulated to, as a consequence, alter an object's original purpose.

In simple terms, design is the method by which the objection accomplishes a a specific function.

Functionality is simply the range of operations an object has -- or in this case how well it serves a particular purpose vs. some other.

The reason the phrase is illogical is because it implies that gun's aren't designed to have the purpose they are intended to by saying it's *only the person that kills, not the gun.

This is clearly false.

The gun is a lethal weapon designed to kill.

THE GUN IS A LETHAL WEAPON DESIGNED TO KILL.

It's function is to shoot out a projectile at a lethal velocity. The goal, in the case of this being a lethal device, is to kill a person (or other living thing). That is the purpose of a gun!

The purpose of a gun is to kill.

So, yes, the gun does actually kill people. This is the design and function of a gun.

The second point to be made here is that the saying "Guns don't kill people, people kill people" excuses the original intended purpose of the weapon by saying the gun can also serve another, different functionality, and that the gun can be used responsibly by a responsible gun owner for said different purpose, such as self-defense or competitive shooting.

Now, this implies that a tool or device can serve other purposes because other functionalities can be implemented. And this is fine. After all, many tools have a full range of operations they can perform. But rarely is it ever the case that the primary operation, its main function, it completely ignored and replaced with some lower order functionality.

You see, saying a gun isn't necessarily a device meant for killing is merely stating that there is another functionality to the weapon, finding it can serve a full range of operations that it wasn't actually designed for.

A gun collector might say it is a work of art and collect them for their technical simplicity, historical importance, and aesthetic appeal. A single mother with children might say it is simply a means of self-defense. A hunter might say it is merely a tool to catch his dinner with. A competitive marksman might say it's just a tool he uses in his sport of choice.

Again, finding a greater range of functionality for an object is fine, but because the phrase "Guns don't kill people, people kill people," tries to have its cake and eat it to, it gets this part wrong.

Just because a gun can be used for catching food, or for sport, or for defense doesn't mean that a gun's initial design, function, or purpose -- mainly the very reason for its existence -- is to be a defensive tool, a sporting apparatus, or a way to procure food. It's not.

A gun is and was designed for one thing and one thing only. To be a lethal weapon. It was designed with to serve the purpose of killing. It is a tool of war, designed for war, and its purpose and function is to kill. And in times of peace, I am continually surprised by how many people seem to overlook this basic fact about guns.

"More people die by hammers every year than by being shot to death," may be a true statistic, but it has nothing to do with the original design, function, or purpose of a hammer.

You see, people have merely found a new operation a hammer can perform, in this case, bashing in a skull. But that doesn't mean that the original purpose of a hammer is to bash in skulls. It's not.

A third reason I dislike the saying is that it shifts all the blame for killing onto the user of the object, saying that it is merely irresponsible gun owners that would kill without good reasons. And in most cases this would be true. Drunk drivers, for example, are solely to blame for vehicle related fatalities when driving under the influence. The vehicles only purpose, it's design and function, is to transport them from point A to point B. But there are laws against driving while intoxicated for this very reason.

Although, as I've suggested, things are rather quite different when it comes to guns, because the gun has one primary purpose and function that cannot simply be overlooked -- and this is the fact that the primary purpose of the weapon is to be lethal.

That by itself suggests that a gun, at least in part, shares culpability with its user.

You might wonder, how can I say this in such a cavalier fashion? This is because the purpose of a gun lines up directly with the purpose of the object's user -- in this case: to kill.

Going about one's daily life in society, as an ordinary citizen going about your business, dropping the kids off at school, paying your bills, watching television, hanging out with friends, and so on and so forth, there would be no real reason to own a gun if you weren't ever going to kill someone with it. (Which might explain why the suicide rate far exceeds gun related homicides, but that's a discussion for another time, because either way -- it doesn't change the design, function, or purpose of a gun.)

Statistically, a hammer works just as well, if not better for killing someone than a gun.

I mean, why even bother owning a gun is hammers are just as lethal? And the answer is one people tend not to like to admit. Hammers aren't designed to kill. Hammers don't kill efficiently enough. Hammers can't maximize killing. A gun does and can. Because that's it's purpose.

Thus the intent behind owning a lethal weapon is revealed, people want a gun precisely because it is a lethal weapon, and precisely because they might have to kill someone with it. Apart from the few instances we find for owning a gun other than killing, in which most people do not even meet the basic criteria of (seriously, how many of us are expert marksmen?) then it's perfectly clear that people own guns specifically for the intent to kill someone if need be. Or maybe even deliberately. And that's sort of the problem, you see?

And gun owners know this. They know that this is why owning a gun sends a clearer message of "back off" and "don't mess with me" to a bad guy more clearly than a hammer does. If you pull out a hammer in a Mexican standoff, people will give you peculiar looks just before they shoot you dead. As the saying goes, "You don't bring a knife to a gun fight." You see, in a gun fight, it is expected that somebody, either you or the other guy, will be killed. Best to bring the tool best suited for the job.

So, as you can see, the "Guns don't kill people, people kill people," logic is wrong. It is BOTH the gun and the user's fault, because the gun's design, function, and purpose is to be a lethal killing device, and that is exactly how the user intents to use it. We can't divorce this fact from the reason for the gun's existence without becoming completely illogical when talking about guns.

Another way to consider how illogical the saying really is, is to consider an equivalent analogy.

Well, this isn't entirely true, is it? A car does, in point of fact, take you places.

That is the design, function, and purpose of a car!

This becomes even more self evident when you factor into the equation modern automated self-driving cars. There is really no other purpose to a car than this: transporting you places.

Now, we could argue for example that a car can be used incorrectly. That a person might find a range of operations a car can perform, and might use it in a way that it is not intended. This is fine. Although, it would be changing the object's initial function by assigning it a new, additional, functionality.

What would be illogical, however, is to say that cars don't take you places. It's a lot like saying guns don't kill people.

Come now. Let's at least try to be honest with ourselves.

Guns do, in fact, kill people. That's what they're for!
Posted by Tristan Vick at 7:33 PM No comments: