Showing posts from July, 2014
Show all

A Frightening Epidemic: America's Obsession With Religion and Unfounded Denial of Science (#I-HEART-BOOBQUAKE!) 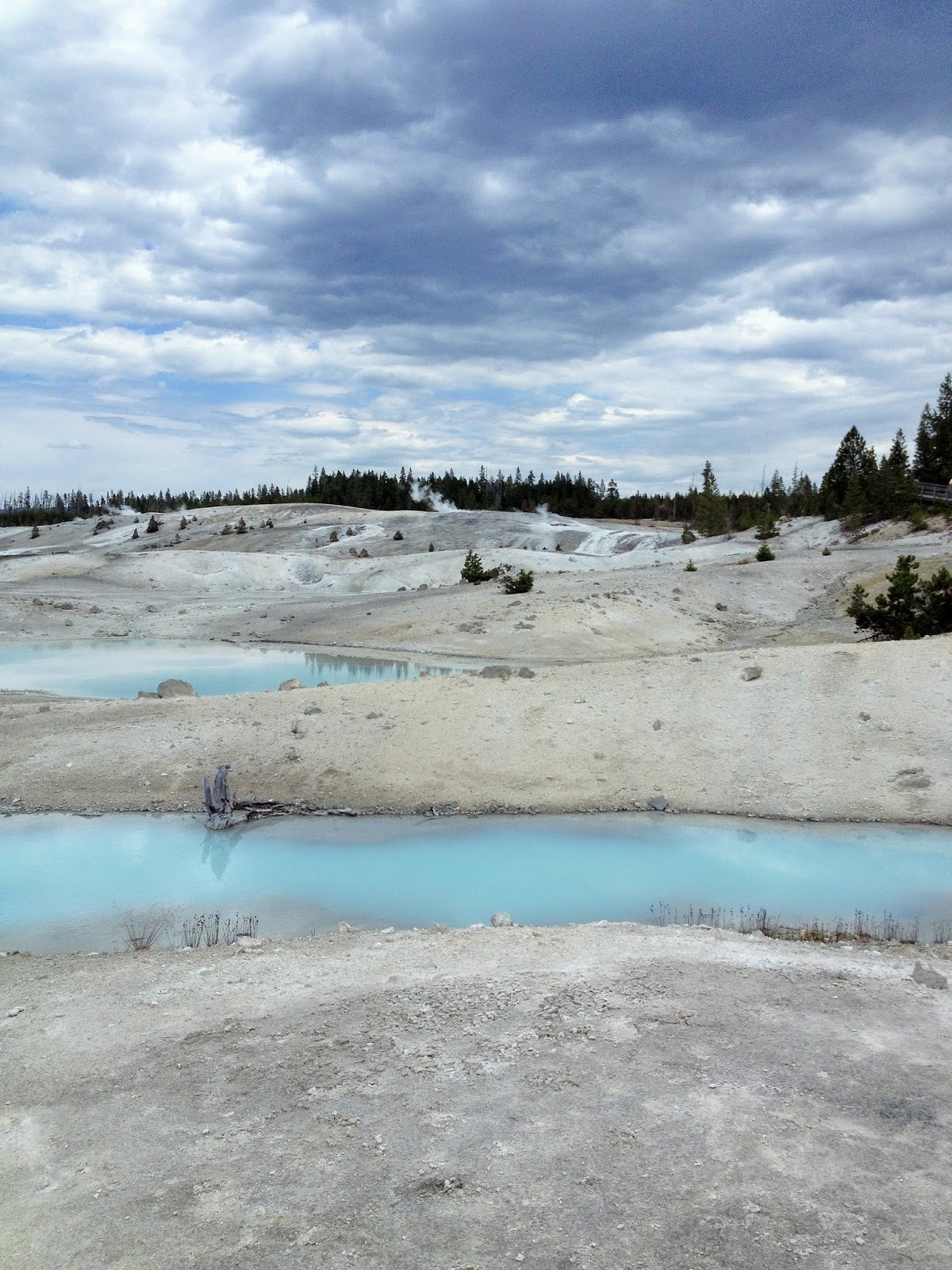 I took this amazing shot on my iPhone of the gysers in Yellowstone National park and of the Thermophiles that change the collor of the water to blue, green, and orange. On the flight over to America (from Japan) I felt bad for the guy sitting across the aisle to my right. He was stuck with two overly devout Christian missionaries who in short order found out he wasn't a believer in the Almighty Christ (TM).  Before you knew it they had their tray tables down and their Bibles open.  For the entirety of the jet being taxied onto the runway (approximately 27 minutes) and the takeoff (10 minutes) and the first couple of hours of the flight they preached and proselytized and professed their deepest felt beliefs. Again and again. And... again. They hit him with every apologetic tactic they had, and as Evangelicals, the arguments were of course all outmoded, outdated, mostly irrelevant, canards that two seconds of thought could reveal as entirely invalid.  The poor a
Post a Comment
Read more

The Economics of Going Vegan: A Personal Look at Why It's Easier Said than Done

July 15, 2014
Disclaimer : Next to religion, politics, and sex it seems to me that the next touchiest subject is probably dietary concerns--what we eat and don't eat. What is contained in this essay are my own personal struggles and experiences with my own diet. The opinions here are my own. If you have any comments or questions feel free to leave them in the comment's section down below. Thank you. I have been considering going vegan for a while now.  I've given it a lot of thought, and I even went two months on a vegan diet. The problem is that in the area I live it's just not yet economical enough to sustain indefinitely. A vegan I know online said I should have no problem doing it, as long as there is a supermarket within distance of my home.  And there are three. But it's not the distance or even the availability of the produce that is the problem. It's the cost. A 2007 study by Adam Drewnowski found that buying healthy food costs 10 times more on aver
Post a Comment
Read more

Ozzy on Affirming the Consequent and Modal Logic

July 15, 2014
There is a YouTuber and an arm chair philosopher (literally not figuratively--he's literally a trained philosopher that talks about philosophy from the comfort of an armchair) by the name of Ozzymandias Ramses II that is as keen and sharp as they come.   In this video he deals with a common objection raised by religious apologists who like to claim that science rests on the fallacy of Affirming the Consequent. I know that it doesn't, but it's hard to put it as succinctly and as beautifully clear as Ozzy does.  His explanation also helps clear up the distinction between modus ponens and modus tollens , which is one of the first things I learned about when studying modal logic.  So, I hope those who are concerned with rationality and being better critical thinkers will take a look at this video, because it's highly rational, informative, and helps clarify a few key concepts in philosophy that are beneficial for those of us who like to engage in the Great Deb
Post a Comment
Read more 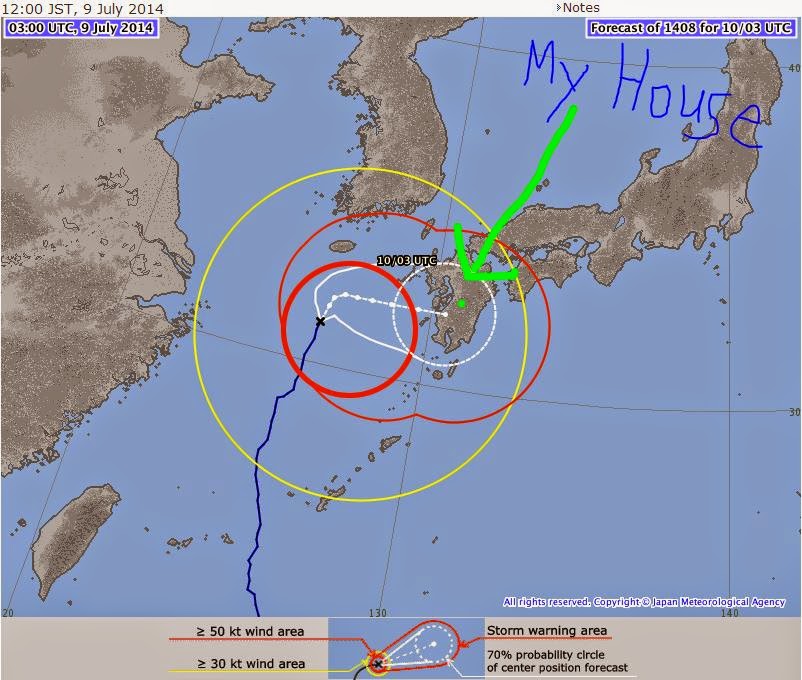 Typhoon Neoguri is heading straight for Kyushu, Kumamoto (where I live in Japan). We've already closed the blast doors ( amido ) which cover all the windows of our house with slatted metal aluminum shields to deflect rain and debris.  I've been following it close on the English page of the Japan Meteorological Agency (which you can find by clicking here ). The island that gets slammed (in the above image) by the typhoon is the on I am on. Kumamoto is the Prefecture facing the oncoming storm. I'll keep you posted on how we fare. But if you don't here from me again... I've probably been whisked off to the magical land of Oz. A beautiful calm 24 hours before the storm. Probability for duration and strength of tropical cyclone.
Post a Comment
Read more

Sam Harris, Morality and Some Thoughts on the Belief in an Afterlife 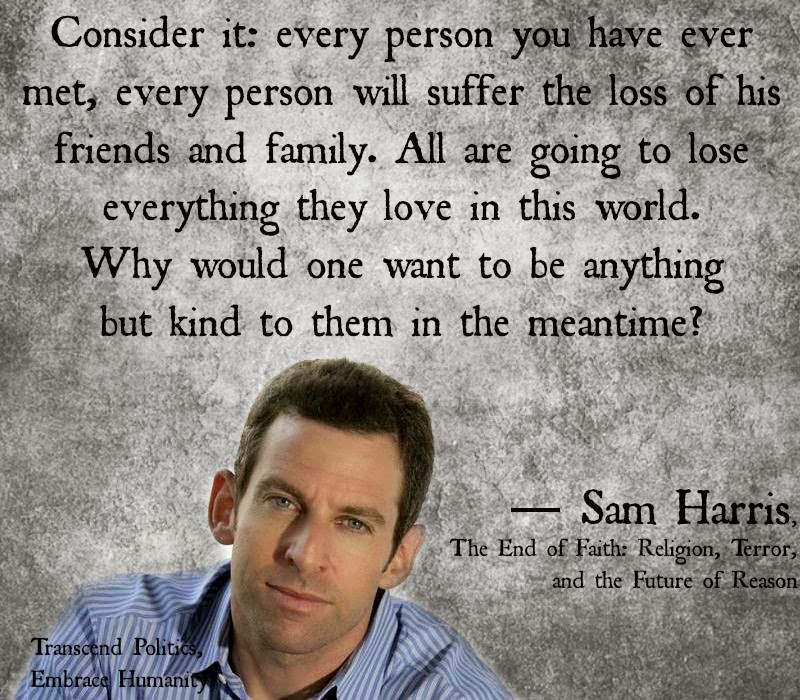 I saw this Sam Harris quote floating around and thought I'd share it here. I find this quote extremely important for several reasons. First, I think it shows that there is a real genuine concern with what we might call human morality, or ethics, as separate from other kinds of morality, animal morality for example. It highlights the fact that morality is mainly a concern for humans, with what humans do, to and among other humans. Which brings me to the second reason I find this quote important, it helps to highlight the fact that without our ability to reason, our moral considerations would largely be meaningless, whether or not things like objective morality should exist. Morality, whether subjective or objective, can only have meaning if we know how to think about moral considerations and have moral concerns. Morality can only have importance to us if we know how to think about our actions in ethical terms and are able to weigh, either through empathy or pure
Post a Comment
Read more

July 03, 2014
Hemant Mehta of the Friendly Atheist just released a video explaining why he feels obliged to promote atheism. I thought it was a good topic to discuss, so following his lead I will offer my own reasons of why I am an advocate for atheism. Atheism is actually more than just the non-belief in deities. Don't get me wrong, the definition of atheism is certainly a straight forward concept, but what we might highlight as cultural atheism , including but not limited to New Atheism, the atheist thinkers who came out of the Golden Age of Freethough, such as the Great Agnostic Robert G. Ingersoll, the atheist thinkers who came out of various enlightenments, whether it is Paul Thiry d'Holbach or David Hume, are all representative of a secular tradition that upholds atheism as, perhaps, something more than just the mere lack of belief in God or gods. Cultural atheism, like cultural Christianity, is merely a byproduct of living in a secular culture and society which adopts a secula
Post a Comment
Read more
More posts