Showing posts from 2019
Show all

May 16, 2019
Keyword: Abortion [*Disclaimer:* this gets long and philosophically complex. If you're just going to harp ad nauseum that abortion equates to murder, then don't bother responding. The moral reasoning and scientific knowledge that follows is too advanced for you.] [*Disclaimer 2:* Serious responses only, please. That doesn't mean I don't want disagreement, but simply sharing twice-regurgitated anti-abortion rhetoric does not an educated opinion make.] I'm wondering if certain anti-abortion bills trespass on anti-slavery laws. If, for example, the legal claim is that the woman has NO autonomous right over her reproductive organs/choices, and the state -- by way of law and legislation -- forces her to be an incubator, effectively making her State-owned chattel, then does this not constitute a type of slavery? I'd argue that it does. Owning another human being for forced labor, or owning any part of them, including their reproductive organs -- and by extension, thei
Post a Comment
Read more

Happy Easter! The Truth About the Resurrection of Jesus 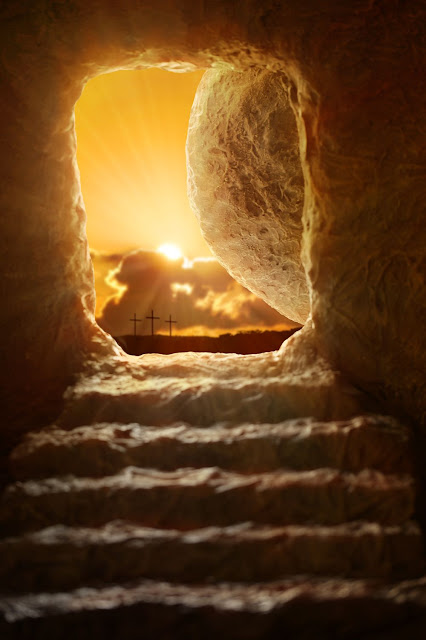 W ith Easter Sunday approaching, I would like to look at the resurrection account of Jesus Christ from the historical perspective. In other words, beyond the stories contained in the Christian Bible what does history really have to say about the event itself. It’s commonly known that Christians in the 2nd and 3rd centuries didn’t read the New Testament because the New Testament didn’t exist yet. The New Testament scholar and historian Bart D. Ehrman teaches us that The books themselves, of course, had been written, but they had not yet been collected into a sacred and authoritative canon of Scripture. The term canon refers to a collection of authoritative books. … our canon did not yet exist as an officially recognized collection during the second and third centuries. He goes on to inform us that this was just the least of early Christians worries. Because there were so many books that were written and published together – all of them claiming to be authoritative – th
Post a Comment
Read more

Chick-fil-A Hates Gay People: But It's okay because they sometimes give you free chicken sandwiches! 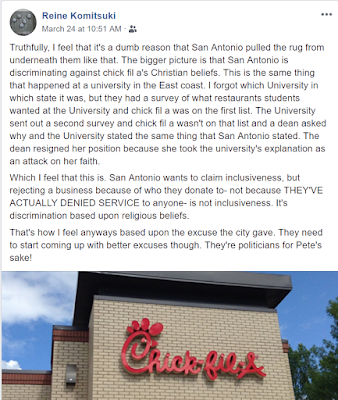 Intro: Where do I even begin? Although I've taken early retirement from blogging here on the Advocatus Atheist and I'm doing my best to avoid talking about religion and politics, every once in a while I see something pop up in my social media feed that boggles my mind. There are times when it's impossible to bite my tongue and I may, from time to time, open my big mouth. This, in turn, sometimes drags me into a larger debate than I initially cared to get into. Except, sometimes the apathetic stance of not caring is the more damaging stance to take. Sometimes, you have to speak out and say something against the bigotry and prejudice that people fling about with reckless abandon.  Sometimes, you just have to bite the bullet and get your intellectual hands dirty with the dialectic. Chick-fil-A Hates Gay People: My Internet Debate (Part 1) So, there I was, minding my own business. Then an article about Chick-fil-A pops up in my feed.
Post a Comment
Read more

The Abortion Debate: What the Pro-Life side gets Wrong

February 11, 2019
I don't often get political on my page. But I will talk about abortion because I think it's a bioethics debate that's important to human rights and the quality of life. A friend of mine shared a political cartoon (but actually anti-abortion propaganda) on his page.  Like me, he was shocked by the lack of understanding about the recent New York bill that safeguards the right for hospitals and doctors to perform emergency abortions when either the fetus will die in the birthing process or the mother will die.  Really, that's all the bill protects. The right to save life via a necessary emergency medical abortion. But cartoons like this pop up and play to the emotions of an uneducated public whose reaction is...oh, they're killing babies! Caterwauling about all the baby killin' goin' on in the U.S. But this just goes to expose the irrationality of the pro-life side and reveals they prefer hyperbole and scare tactics to science and truth.
Post a Comment
Read more
More posts