Hooray for Muppets! Down with Chick-A-Hole 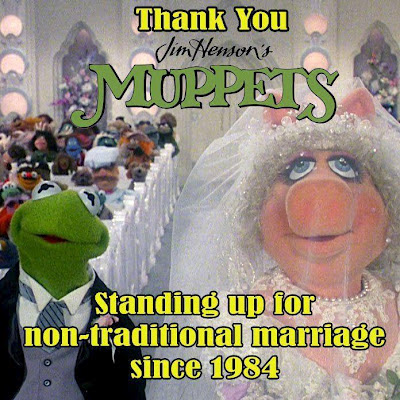 Chick-Fil-A is proving itself to be one of the most corrupted and immoral food franchises out there. Their business practices are two-faced, self serving, and just plain fucked up (and that's putting it mildly).

So earlier this month the president of Chick Fil A, Dan Cathy, decided to make a not-too-thoughtful statement regarding the gay rights debate. Cathy went on the radio asserting:

"[W]e’re inviting God’s judgment on our nation when we shake our fist at him and say we know better than you as to what constitutes a marriage. And I pray God’s mercy on our generation that has such a prideful, arrogant attitude that thinks we have the audacity to redefine what marriage is all about."


Never mind that Cathy doesn't understand the first thing about the history of 'traditional' marriage, he merely represents the populist Christian view that, since the Bible says homosexuality is bad, like most Christians raised on this stunted mentality he simply finds homosexuality "gross." That's the only argument anybody's got--and it's not a very good one if you ask me.

Doubly never mind that Chick-fil-A does not have the right to define what marriage means, traditionally or otherwise. I mean, give me a break! They make chicken for crying out loud.

But it's not beyond the Chick-Fil-A powers that be to support a homophobic agenda masquerading as, what Cathy calls, support of "Christian family values."

Never mind that gay marriage has ZERO impact on Christian families or what values they hold. Two people falling in love, getting married, and living happily ever after... well, that's not exactly going to ruin your day.

But all this only paints Chick-fil-A as a sexist, homophobic, corporation. What makes it immoral and fucked in the head is what followed in the wake of the media fallout over Chick-fil-A's anti-gay statements and position.

Following Chick-fil-A's display of intolerance, the CEO of The Jim Henson Company, Lisa Henson, had the company give their royalty payment from Chick-Fil-A to GLAAD (Gay Lesbian Alliance Against Defamation).

This sparked the mental image in millions of Muppets fans of Miss Piggy giving Chick-Fil-A the finger, and telling them exactly what hole to shove their Chick-Fil-A nonsense. Apparently, this gesture of The Jim Henson family and company supporting gay rights, and upholding human rights (big of a Muppet to do) didn't sit well with the powers that be over at Chick-fil-A. 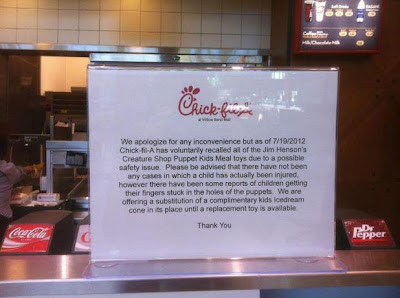 Soon after The Jim Henson Company's denouncing of Chick-fil-A, a sign (see above image) started appearing in Chick-fil-A restaurants which read:

"We apologize for any inconvenience but as of 7/19/2012 Chick-fil-A has voluntarily recalled all of the Jim Henson's Creature Shop Puppet Kids Meal toys due to a possible safety issue. Please be advised that there have not been any cases in which a child has actually been injured, however, there have been some reports of children getting their fingers stuck in the holes of the puppets. We are offering a substitution of a complimentary kids icedream cone in its place until a replacement toy is available. Thank you."


Wow! Talk about two-faced, dishonest, back-handed business practices. Not only were there NO problems at all with any of the Muppet toys, all the various models of them, Chick-fil-A blatantly, unashamedly, concocted a huge-ass LIE!

Apparently, while Chick-fil-A supports "Christian family values," whatever that might mean, it doesn't support any other Christian values, like... NOT lying. A pretty big one as it made the BIG TEN of things, according to Christianity, NOT to do.

"You shall not give false testimony against your neighbor." (Exodus 20:16)


So let's review.
1. Chick-fil-A is anti-gay.
2. Is bigoted (i.e., purports to support Christian values then turns around and ignores those values the first chance it gets).
3. Lies (see #2).
4. Defames rival companies and then tries to make itself look good by covering it up.
5. Also, astonishingly enough, Chick-fil-A is seemingly prejudiced against Muppets.

I mean, seriously, what did the Muppets ever do to Chick-fil-A other than draw countless young and hungry mouths to their store for one of those happy toys? I ask you, wouldn't it have just been easier for Chick-fil-A to honestly state that they recalled the Jim Henson toys as a voluntary choice and left it at that? The truth wasn't hurting Chick-fil-A, after all, they already made their dumbass-anti-gay-intolerance perfectly known. Why the big fat lie on top?

Obviously Chick-fil-A wanted The Jim Henson Company to lose their reputation as being kid friendly. This is a back-handed way of trying to discredit The Jim Henson Company, by saying, they hurt kids. They couldn't simply agree to disagree--no. Rather, Chick-fil-A had to do something about it--so they sought to ruin the reputation of a company they didn't agree with. Not only is that one whopper of a lie, it's defamation too. Chick-fil-A better be careful... and I'm not talking about a defamation lawsuit which they would sorely lose, I'm talking about pissing off Miss Piggy. Because that would be a HUGE mistake. 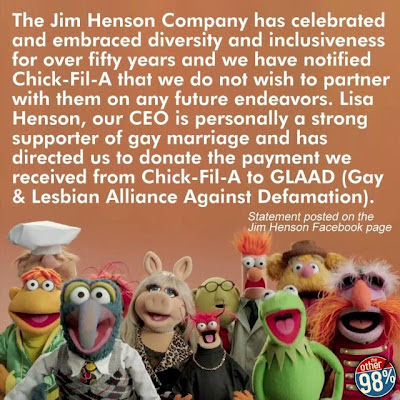 Now, instead of admitting to any of this back-handed business and seedy--if not outright sinister--behavior, Chick-fil-A is making up cover stories to save their sorry asses. They have even gone as far as to create fake Facebook supporters to make their company look good in light of the recent defamation and intolerance. Talk about classy.

Hey, here's an idea, how about you Chick-fil-A wankers stop defaming innocent people, stop being so goddamn intolerant of others, stop dictating how people ought to live their lives (which is none of your goddamn business), and stop lying about your immoral behavior. Yeah, how about not being assholes all of the time and just try to... here's an idea... keep to your so-called "Christian" word and try to emulate the love of Christ? If that's too hard for you, and apparently it is, why not simply try to be good, for goodness' sake?