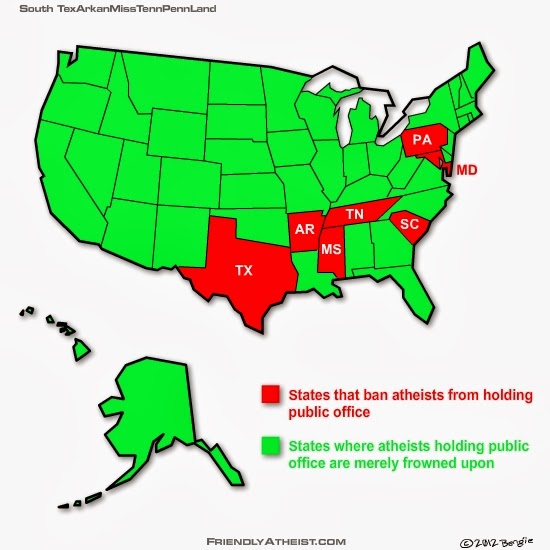 People are making much ado about nothing with regard to the American Atheist's lawsuit against the 9/11 cross (see here). That's not even a controversial lawsuit.

For starters, the cross is on public land where zoning laws restrict the preferential treatment to sponsor religion. The reason zoning laws restrict such things is because if one religion gets to do it then, legally, all religions could put their iconography up. Then you have space issues, safety issues, and a whole slew of other legal issues which come with granting such trivial leeway. Then there's the fact that it's unconstitutional, because the government, city or otherwise, is not to endorse any religion over another if at all.

The lawsuit will succeed, because if it doesn't, they can appeal and bring up an additional lawsuit of religious discrimination, since part of the lawsuit entails that if they allow the cross to stay up they have to allow the American Atheists to put their own monument up as well--dismissing this claim would then be grounds for a new lawsuit as well as the appeal.

So either way the 9/11 cross thing is a moot point--the government showed preferential treatment, endorsing Christianity and it's simply not allowed to, legally speaking. So regardless of what your feelings are about the cross, or whether it is truly divisive or not, doesn't matter. It's illegal, and that's why it has to come down.

It's strange to me, however, how many atheists have defended it. Pick your battles, they say. It's not big deal. But then such an attitude raises questions of when is pandering to the privilaged class too much? It may not be a big deal, but not being able to hold office in seven U.S. states because you're an atheist is a big deal.

I for one find that whether it is simply letting an eye-soar of a cross slide, or outmoded laws like not allowing atheists to hold public office go unchallenged, that as long as you pander to the privileged class and let them get away with it--they'll continue taking everything for granted and you'll continue to get marginalized for your beliefs or lack thereof.

Personally, I see that a general reluctance, or apathy, to protest the privileged class in even the most trivial things leads to worse conditions than if we wasted a few hours of our time and energy giving ourselves a voice and making a little bit of a ruckus. Some may disagree, but I feel I ought to mention that they won't be the one's changing anything any time soon.

Which leads me to an even greater complaint, since the only thing I detest more than apathy is the indulgence of stupidity.

Wyoming Governor Matt Read has approved a budget that would prevent the state from reviewing or funding a new set of science standards that treat climate change as fact (read more here).

Colbert asked Tyson "What do you think would've surprised Carl Sagan most about what has changed in our knowledge of the universe since 1996"?

Tyson replied, "I think what would surprise him the most is that we still have to argue that science is something important in society."


I fear Neil deGrasse Tyson may be right.


The thing that bothered me most about the Wyoming blocking of an improved science curriculum wasn't so much the fact that scientifically ignorant folks felt it important enough to prevent genuine science from entering the classroom, but their reasons for doing so.

The reasons are breathtakingly inane.

According to the article, such opposition is common. A Baptist minister went on to say:

“Outsiders are telling public school families that we must follow the rich man’s elitist religion of evolution, that we no longer have what the Kentucky Constitution says is the right to worship almighty God.”


This is a fine example of the confusion of the privileged religious right.

Evolution is not a religion. It's a scientific fact. Denying it doesn't make it any less true.

Meanwhile, teaching evolution does not in any way shape or form restrict others from worshiping or believing what they want.

These are completely unrelated things.

The only time they would overlap is if you still believe in a creation myth as contained in many religious texts when evolution has absolutely falsified such a notion. But even so, that doesn't prevent one from believing in God or ignoring the science anyway.

In the article we also learn from science deniers that the new standards “seek to infuse students with a particular political view regarding climate change, sustainability, renewable energy and other environmental matters,” said Judy H., according to the organization COPE Inc., which says it promotes objectivity in education.

That's not actually promoting objectively, since all of those scientific things mentioned above are demonstrably and objectively true.

If one's political views weren't impacted by the truth of the matter, then we'd have a generation of scientific illiterates trying to make policy changes based on nothing more than their empty headed, self-serving, ignorance. Oh, wait. We already do.

It's sometimes hard to believe that people can be this stupid, so stupid in fact that they want to remain stupid because a proper education is an insult to their stupidity.

Sadly, it looks like there is no immediate fix for this problem either, since the only way to remedy it is to educate people better, but it is this very education that they adamantly dissent from.

The confusion of the privileged religious right can be summed up in one sentence:

"The religious right is stuck in a self-induced spiral of ignorance which has made them sink ever faster toward the narrow funnel at the bottom--the dizzying part right before they implode due to the massive force of their own crippling stupidity."