It's All a Matter of Semantics 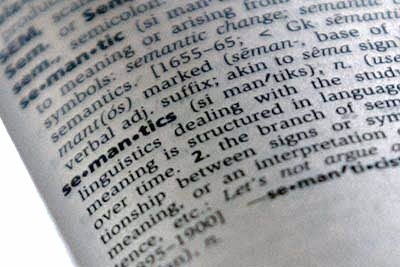 It’s All a Matter of Semantics

“I am thus, one of the very few examples in this country of one who has not thrown off religious belief, but never had it. I grew up in a negative state with regard to it. I looked upon the modern exactly as I did upon the ancient religion; as something that in no way concerned me. It did not seem to me more strange that English people should believe what I did not, than that the men whom I’d read of in Herodotus had done so.” –John Stewart Mill (1806-1873)
"The Christian religion is so manifestly contrary to the facts, belief in it can only be held with the most delusional gerrymandering imaginable." –Richard Carrier (Historian, PhD)


In the following essay we will discuss some of the specifics regarding semantic games Christian apologists employ, namely that of “semantic confusion,” and I will show how it is used and what the effect of it is in the semantic discourse. Also in this article I will seek to clearly define semantics, and show using critical methods why apologists’ use of semantics is, not only slapdash, but also frequently misapplied as well as grammatically incorrect.
What’s in a Word?
Christians love nothing more than to try and change the implied meanings of words. I’ve studied this apologetic tactic extensively, because no other field, with perhaps a few exceptions in philosophy, tries so desperately to create a “semantic confusion” in its discourse.
Nevertheless, where philosophers change meanings of words it is often times for the purpose of challenging our conventional understandings of the usage, meaning, and purpose of the word so that it may sponsor new ways of thinking about it—this is known as inferential role semantics (also see: coherence theory of truth). Yet the deliberate semantic confusion employed by Christian apologists, and occasionally theologians, rarely, if ever, is concerned with different ways of thinking and seeing—but is preoccupied with just the one devotional or “orthodox” way of thinking and seeing.
Consequently, this begs the question: why then for all the word play?
The Rhyme and Reason of Semantic Games
The answer is surprisingly transparent. Speaking from experience, Christian apologists will repeatedly distort or reverse the meanings of words to force the terminology into having a new or different implied meaning for the purpose of convincing you of their case. Needless to say, this new meaning inevitably coincides with the Christian stratagem of reversing the burden of proof along with supplying a barrage of ad hominem attacks while simultaneously sowing semantic confusion.
If you call them on it, challenging their methods, they will simply rely on this semantic confusion to deny your accusations and peddle backwards, rework the terminology to re-align with their beliefs, all the while giving you the run around. I only point this out here because it shines light on why Christian rhetoric is so persuasive.
Betwixt the confusion of language and fluctuating meaning Christian apologists can find ample wiggle room to adapt their intent, their desire to convince and evangelize, in a fly by night fashion allowing them to deflect or reroute unprepared debater’s questions and comments and hijack the discourse.
In this way, instead of having to give an example of what is categorically true, they can simply reverse the burden of proof and rhetorically ask you in return, “What is your definition of truth?” After which they may wantonly call attention to how your definition limits their beliefs or convictions, how this is unfair, how you’re being too materialistic with your demand for proof or evidence, and so on. Since the term truth accompanies with it an explicit meaning, something they are extremely uncomfortable with, they will change it to have an implied meaning, and thereby escape having to give account for what isn’t apparent to be factually true at all; except for their propensity to wish to continue their belief in it as something which is true (to them) regardless of what is and isn’t palpably true. But don’t let all the smoke and mirrors charades fool you, because the truth isn’t always necessarily relative and observer dependent; in other words, sometimes a spade is just a spade.
Statements of Truth vs. Truth Claims
Consider the statement that “Although atomic particles do not observably appear to have mass, we know they must because we can split the atom…” is a statement of truth, of knowing something is true because it is testable and so provable. The proclamation, “I know it to be true in my heart that fity-thousand invisible pink unicorns dance on the head of a pin in the fourth dimension…” is not a statement of truth—it is a declaration of faith. To believe it is true, contrary to what the evidence suggests or what is discernibly true, is a matter of belief, not of knowing. We must not overlook this distinction.
Even so, I would caution that shifting the emphasis on the implied meaning rather than the explicit meaning is only an apologetic tactic to sow even more semantic confusion. The difficulty lies in the fact that for the apologist a spade is only a spade when they want it to be, the rest of the time they change it to whatever best suits their needs, and if your definition is in disagreement to theirs they ask you to “define spade,” to catch you up in a relativist trap, and will promptly dismiss your explanation if they should find it to be disagreeable and in conflict with their convictions or belief system.
Technically speaking, assigning arbitrary implied meanings to refit words to the Christian worldview is utilizing semantics for the purpose of forcing the terminology to align with their devotional understanding of what they hold to be the “God’s honest truth” so that they can dictate the terms of the semantic discourse. In other words, they want to redefine and replace the semantic theory of truth with the religious truth as they see it, and if allowed this standard, they override the definition to set up a semantic holism. In so doing, the word itself, or the sentence or phrase itself, does not count for much in the semantic discourse, but rather, it only becomes vital to the overarching set of thoughts or the whole theory. If your definition doesn’t support their theory, then they throw it out, and guide the discourse back to their standards. But this, in all intents and purposes, ignores the fact that words do mean things, and contain primary definitions, independently of the semantic discourse or how you would seek to use them otherwise.

Disbelieve me if you want: It’s Not Disbelief