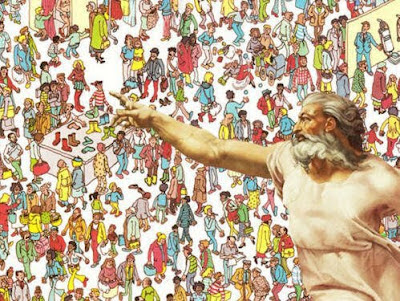 Christians say God wants us to come to know him. In fact, this ominous sounding "good news" comes in the form of a message contained in a Holy book, supposedly a perfect book, which God himself purportedly had a hand in creating.

How do Christians know that this message is vitally important? Because the book they have says it is. Imagine that! What luck.

So this vitally important message, which answers the vitally important problem, which is mentioned only in this book, the "good book," was supposedly inspired into being by God for the simple reason he wants his perfect message to get to us so that we can believe, and be saved, because not to enter into his grace would mean oblivion, since that's the consequence of the problem created by the "good book" if the "good book's" advice is not heeded.

Here's my problem though. A book is not a perfect medium for distributing a message. In fact, there are millions of books which people NEVER read and there is no gaurantee that yours will ever be read.

To compound matters, most people shy away from big boring books, such as deeply philosophical or historically complicated ones. The Bible is a compendium, containing deeply philosophical works and historically complicated ones as well. A massive book consisting of many smaller books. The kind of boring books, consisting of genealogies of people nobody cares about, followed up with deep philosophical insights into problems invented by those who wrote the book to answer such problems, you know, basically the sort of books most people shy away from. There would be absolutely no reason to actually read the Bible unless you were a history junkie or believed that God actually had a hand in writing it.

Coming back to my point though, a book is not a very good medium for distributing a message--especially one as vitally as important as Christians tend to claim. Even in the 21st century books prove to be a rather difficult medium to get people to take seriously. Most books sit on shelves in libraries completely unread. Actually, that's not entirely true. Most books don't even make it onto library shelves. It's that bad! All this, of course, is taking for granted the fact that modern people can read. It says nothing of their desire to read any such topic.

I only mention this because in the time that the Bible was written most people could NOT read--so it is rather questionable why a God, infinitely wise, would choose rather useless medium to transmit his message of love and redemption. Also, there were very few public libraries, so even if you had the ability and inclination to read a copy of the Bible, chances are, there was no local library. Reading Rainbow this ain't.

Here's how an ancient first century conversation between a believer and God might have played out.


"Read my book, which is written in Coptic, or PERISH!"


Sounds rather harsh, when you think about it.


{Note: There is a good article on Judean literacy in the first-century which clarifies things a little better.


It seems that observant Jews did keep the custom of reading--according to both Philo and Josephus. But they kept it within the context of an observant right as a means to study the Torah. It was passed down only to the sons, not daughters. Meanwhile, the language of the Torah was only studied in Hebrew by observant Jews. If you were a Jew living in 1st century Palestine you would be literate in Hebrew and speak Aramaic.

However, there is no Hebrew equivalent of the NT, the "Good News," which was written in Coptic Greek only, as far as we know.

So even if you were a literate Jew, upholding the covenant through the ritualistic practice of literacy, you probably would not be capable of reading the NT when it came around unless you were formally trained in Greek. Which wasn't many.

I only mention this, because, again, it proves my point so well. That dictating a message in a language of the elitist class of society that is not your own language, or even your culture, seems a rather backwards way to transmit the most important message of all time. If God was going to send the "Good News" to his chosen people, the Jews, why do it in Coptic Greek, when we have evidence they did not study Greek, but they studied Hebrew and spoke Aramaic?

Why is it that Christians seem to overlook this problem?

For an excellent book which looks at the literacy of the ancient world, check out Oral World and Written Word by Susan Niditch.}


On top of this, one has to question the wisdom of such a being--if not his malicious intent. *Why a goddamn book? Why not just wait for the advent of email... whereby one could reach almost all of the human race instantaneously with the vital message? Wouldn't that have been, at the least, a little bit wiser?


(*Note: I am not actually cursing in the above--it's a literal question regarding the precarious Catch-22 of having a book by God which literally damns you when you fail to adhere to the content of that book all the while being illiterate. What a kidder that God fellow!)


Of course I am being serious here, and this is not meant as a tongue an cheek question. I am not ridiculing religion--it's already ridiculous enough. What I am asking is actually a very heavy question because it raises philosophical objections to God's competency, intelligence, knowledge, and foresight. None of which seem evident when the question is properly considered. This would effectively destroy ALL the attributes theologians commonly give God.

In this way, the question sets up a logical failure for any sort of being which could not account for the apparent stupidity of putting a message as vitally important as salvation in a book, written in only the language of a desert dwelling people, most of whom could not even read, when in fact, it was a message meant for the whole of humanity.

Why Hebrew? Why Greek? Why Latin? Translating the text to transmit it to other cultures, over thousands of years, seems inefficient in the extreme. Why not wait until the majority of the world speaks English, and then using that nearly universal language, transmit the message then? A few  additional millennium would have made no difference over the tens of thousands of years prior to God's message. An extra thousand years would be a drop in the ocean compared to the hundreds of thousands of years of human suffering before God decided to intervene, right?

No, I'm afraid this question raises a devastating objection to God. It either shows God to be completely and utterly incompetent, and less intelligent than any 21st century four year old with an iPhone, or that God only exists as a figment of mankind's imagination. These are the ONLY two conclusions consistent with the facts.

The question is, if you're a person of faith, can you continue to feel comfortable knowing that your God is incompetent, or else that you concept of God is so flawed that it's not even wrong because it's so far from right that it's irrelevant?

It's a difficult question, which ironically enough, hinges on God's capacity to text message.

Ironic, because it indirectly shows that God doesn't exist, because if he did, the only way to disprove my argument would be to message me on my iPhone and explain himself as to why he chose the worst possible medium to distribute the most important message--when he knew the limitations of that medium and had the power to do it differently (unless he didn't--because he doesn't likely exist). Still, there is the possibility that being God, he'd automatically know my IM handle.

I won't be holding my breath.

*UPDATE*
I just received a message from someone called: "SkyDaddy."

This might be God. Let's read it and find out, shall we?


It seems God is being just as vague as ever. I will ignore the snickering of my atheist friends in the other room, who think they are oh-so-funny. This message appears genuine.

*UPDATE #2*
I was wrong. The message was a complete hoax. My atheist friends are being smart-asses again.

*UPDATE #3*
A got another message from "SkyDaddy." He wants you all to know that it "wasn't a hoax," and that my atheist friends are "lovely people."

Well, there you have it folks.