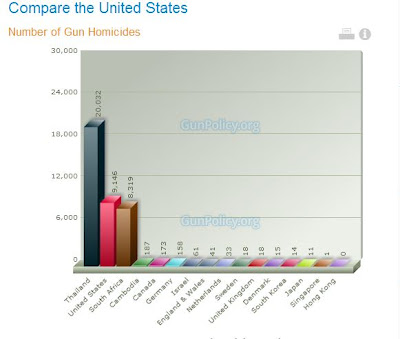 Earlier this week I made the comment that, "Guns are simply tools designed for the purpose of killing. Not protection. If you want protection, buy a taser, or rubber bullets, or a higher a body guard. Gun are tools and their purpose is to deal a lethal blow to your enemy."

My pro gun friend stopped me and said: Nooooo! Guns are designed for shooting bullets.

But this was his objection to my point. You see how it is flawed, right?

If we want to get real specific, we could say: guns are for propelling explosive metal projectiles at near the speed of sound in order to penetrate your enemy's face and render them dead.

So, you see, if you use such an argument, please follow it to its logical conclusion.

Other arguments I've heard that are just lame ducks are:

Talk about your logic fails. No matter how hard I've tried to press the bread between my hands, it has never turned into toast.

But low and behold, I had people actually telling me things like, "Guns aren't lethal weapons, they're just designed to shoot bullets."

That was an actual argument for why people should be allowed to have guns!

Another one I got today was in response to my suggestion to tax guns and ammunition and use that extra funding for mental health care, such as psyche exams for gun owners. A reasonable suggestion, right? I met this response: But hunters need their guns too! And it would ruin the economy if you raised taxes on their firearms.

Literally, this is the type of moronic stuff we have to deal with.

People want their guns soooooo damn badly that they'll literally say anything in order to keep them.

But here's the deal, it's not entirely about the guns. The guns are just one fraction of the problem. It's mainly an issue about psychological and mental health.

That's the key point that everyone seems to be aware of, but too many are glossing over.

Not only this mental health issue, but other mental attitudes, such as the violence aspect of Americans must, in my mind, seriously be investigated.

Like Roger Ebert and all these "the media makes us violent" excuses, that's all they are, excuses! Excuses to blame the media so that you can feel better.

As for all the soccer moms and conservative nutters blaming it on video games and violent TV, even as these things are proved to make a person less sociable, that's about all that can be said. Besides, this argument doesn't sit well with me either. Canadians have all the access to American programming and video games that we do, and they don't go bat-shit crazy violent on each other--not even half of a fraction as much as Americans do. What's with that? I for one want to know. Really. I do.

I brought up the example of rape to show (and compare) how drastically violent America is compared to other countries of equal population density, etc.

Japan roughly had 2,000 reported rapes in 2005 and America, brace yourself, upwards near a 100,000. Even if you doubled Japan's population to match the U.S., it's still only 4,000 reported rapes. (Sure, the cultures are different, but the difference which is obvious is the violent tendencies of Americans is obviously greater. Car theft is another good comparison.)
Whether or not the media is to blame for increases in violent behavior, we are still culpable for our own actions. It's a pretty simple concept. What it reveals, however, is there are too many Americans struggling with this notion of culpability.
So maybe what we need is better parenting and better counseling for troubled youths. Certainly better health care is a must.

If we can teach our teachers and our  children to identify such mental illness in their peers and co-workers, then maybe we could prevent further atrocities by identifying the problems early on.

At any rate, we should begin to investigate not only why Americans are so psychological hooked on their guns, but what is compelling them to feel they need them so badly?

Do Americans really feel that unsafe in their own homes? In their own neighborhoods? Are American streets really so dangerous as to compel you to pack heat? If so, the problem is far greater than just who has or doesn't have guns. The problem goes much deeper.

But adding more guns to the problem is only adding fuel to the flame. It will blow up in everyone's face, and that is a statistical prediction which nobody can deny. And those that do deny it are simply living in a fantasy land--and well--that might explain half the problem right there.