August 24, 2011
This one is just too funny, so I had to blog about it. It appears that McElroy Road Church of Christ, in Ohio, was fed up with all the atheist billboard campaigns being put up, and they decided to combat the "godless" messages with one of their own. Wait... what? 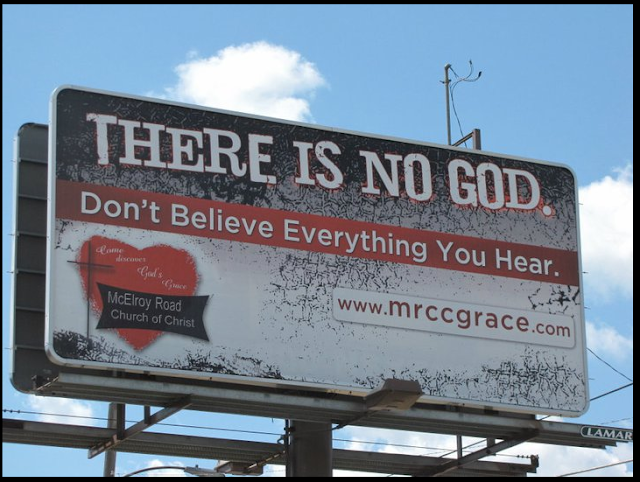 No kidding, this is what the sign actually says.
Now if your religious, you might not find the bald faced irony which is on display here, but apparently a lot of people did, because the Mid Ohio Atheist group had to make a statement that they were not responsible for the advertisement in any way. According to their official comment:

While we certainly do agree with the sentiment expressed on the billboard- that there is no god, and that people should not believe everything they hear, we want to clarify that this is not our billboard.  It was not paid for by us in part or in the whole.  Nether were we involved in the design of the billboard.

Being the good sports they are, the Mid Ohio Atheists didn't forget to thank the McElroy Road Church of Christ for expressing their sentiments exactly.
Still, I find it hilarious that a Church would spend so much time and money, go through so much planning, to basically shoot themselves in the foot. I guess it just goes to show that many religious groups still don't actually know what it is atheists are arguing for.
Which I find both sad and funny. Sad for them, but funny for us atheists.

But none-the-less, most atheists agree, if you want to be a good critical thinker, it is wise advice, "Don't believe everything you hear."


It's the same as saying, question everything, and that's the heart of skepticism.

At the same time, atheists fully agree that "There is no God."

Which, when you think about it, it basically the same as stating God does not exist.