More Christian Spam: Or Why I had to Ban Bob the Christian (Also, were Jesus and Yahweh One and the Same?)

June 03, 2014
Hot on the heels of Jesus Daughter, who spammed me earlier last week, I get another nutter by the name of Bob. Bob the Christian. 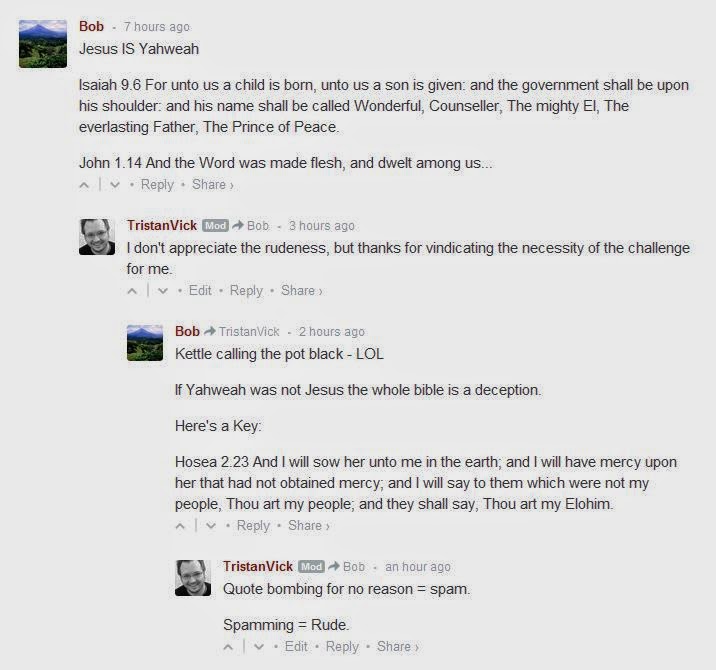 Like Jesus Daughter, he simply drops some unrelated Bible quotes. The post was originally about challenging believers, of all faiths, to read more science books. I also gave a handy-dandy list of exciting and highly informative science books to read for those interested.

So, as you can see, Bob's quote bombing and subsequent defensiveness are way out of line. They have absolutely nothing to do with the post.

He could have posted on one of my early articles, even the Jesus Daughter one, which itself was sort of a response to an earlier article on Jesus not being an original moral thinker. Either of those would have made more sense to drop the quotes, even though it still would have amounted to spam.

But Bob the Christian wasn't finished. Not quite yet. Because, apparently, pointing out that he was being rude gave him all the incentive he needed to open his mouth and let the stupid come flooding out. 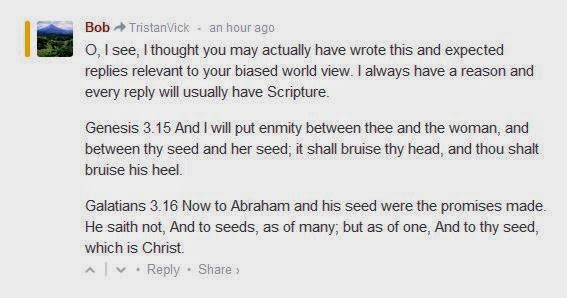 I guess he didn't like the fact that an atheist was calling him out on his immoral behavior, since all atheists are supposedly without morals. It even seems he may have been under this false conception, because it really seemed to bug him that I pointed it out. Then, in true Troll fashion, he spammed me some more, this time, with even more obscure Bible quotes.

By this time Bob's shenanigans were growing old, so I reprimanded him and told him to knock it off. 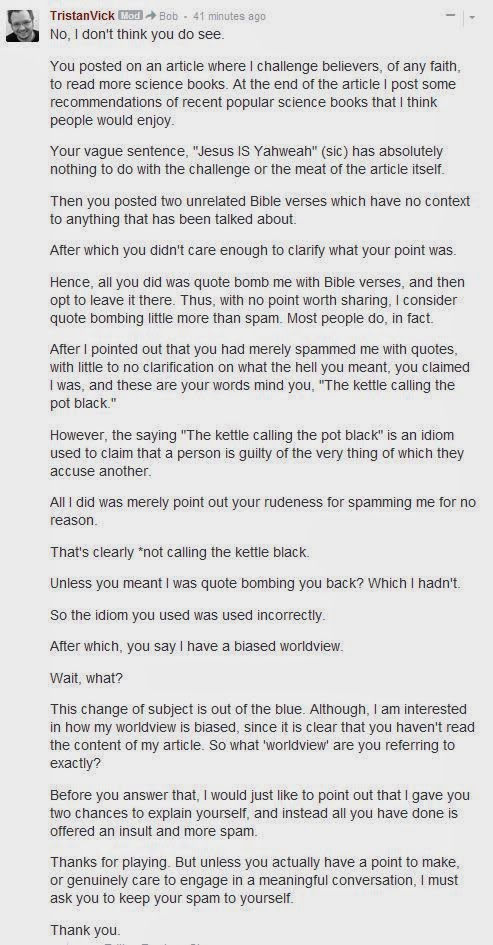 Of course, now I was just feeding the Troll. And I had the sneaking suspicion that Bob would try to one up the atheist, because now I hadn't only pointed out his immoral behavior, but I had called into question his level on intelligence. But I mean, can you blame me? He was being a rude asshole.

As such, I knew it was only a matter of time before Bob the Christian responded. Low and behold, this morning I had a new comment from Bob. 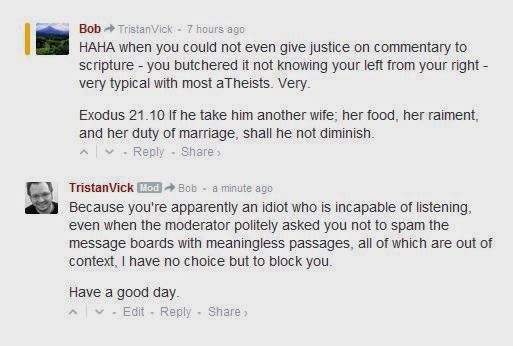 Bob revealed his true colors here. His pretending he was in an actual conversation with me was funny. But the fact that it seemed to amuse him more than anything else just to flood my blog with irrelevant spam meant I had no choice but to ban Bob. Bob the Christian.

I have to wonder. Do Christians like embarrassing themselves?

Oh, and I feel I have to address one last comment of Bob's, so that other people don't get the wrong idea.


Out of the entire exchange Bob ever wrote only one coherent sentence--although it had nothing to do with anything.

It was when he said:

"If Yahweah (sic) was not Jesus the whole Bible is a deception."


This coming from my complaint that "Jesus IS Yahweh" had absolutely nothing to do with the content of the article. But, I feel I ought to set the record straight, for Bob's sake.


In the WHOLE of the New Testament, Jesus never claims to be God or the Son of God.


Pontius Pilate interrogates Jesus, at his trial, and asks him if he is the one who is called the "King of the Jews" and Jesus effectively says, "That's what they say."

I'm paraphrasing, of course. But those who know their scripture will know the verses in question. There's been enough Holy Spam for the week.

But I will quote just one bit of verse, again, for Bob's sake. It's when Jesus states:

Clearly, then, it cannot be that: Yahweh = Jesus.

Because by Jesus' own admission: Jesus < Yahweh.


If Bob could read, instead of simply cutting and pasting Bible quotes, he probably would have read the book of John. I have it on good authority it's one of the books most Christians *actually read.


What was that thing Bob said, again?

If Yahweh was not Jesus the whole Bible is a deception.

Well, there you have it folks. From the horses mouth.