The Colin Kaepernick Controversy: And why the Patriotic Bellyachers are Missing the Point 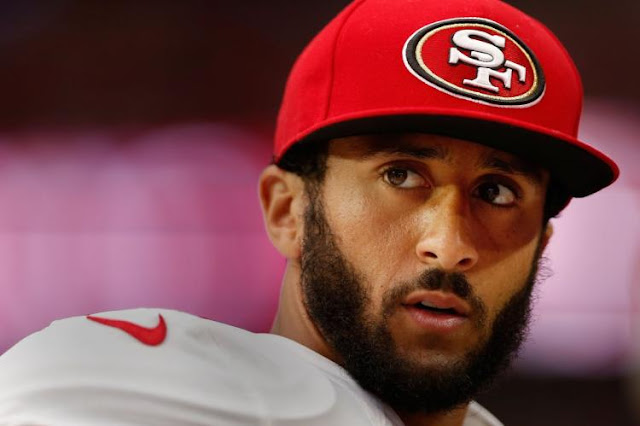 I rarely get political, but when I do it apparently gets me unfriended by three of my Facebook friends.

Not that I care. I know that makes me sound callous, but given the context it really does seem that their refusal to let me voice my opinion after they have blathered theirs in a public forum is just a kind of censorship. They don't want to hear from detractors because we might say something that genuinely challenges their position. This would force them into an actual conversation to defend their views. They don't want to defend their views. They just want their views to be accepted as correct, without question.

Look, I'm sick and tired of this totalitarian impulse being exhibited by people who say that the peaceful protests of taking a knee or not holding your hand over your heart for the flag is offensive to them, personally. But here's a newsflash. Nobody cares if it's offensive to you. And besides this, all ya'all Kaepernick bellyachers really are missing the point here.

My three grandfathers, like the millions of others who have served, did not serve so I could live in a totalitarian state where my patriotism is dictated by others and where I'm not allowed to peacefully protest because someone might find it offensive.

They fought so I could live in a free society.

That came with the tacit knowledge that people might not always hold Old Glory to the same amount of respect or show Old Glory the exact amount of veneration expected. But they didn't fight for a flag. They fought for what it stood for. And when what it stands for seems to be trampled on, abused, and ignore on virtually a daily basis then that's when a protest has that much more meaning. Not less.

But, again, this is missing the point.

Look, if the protesters were taking a knee and kneeling JUST to be disrespectful, then yeah, that would be showing disrespect with the deliberate intent to cause offense.

But that's clearly not what they're doing.

They are peacefully protesting about how an entire segment of the populace (mainly blacks and other colored minorities) gets unfairly treated on a daily basis and, essentially, are saying this doesn't appear to them to be the land of the free. At least, not from their perspective as a minority race. And that was Kaepernick's message.

Yeah, yeah, I know he personally isn't the disenfranchised or downtrodden minority person in question here, but he used his celebrity and status as a pro football player to stand up for those who had no voice. Are you seriously going to question that man's patriotism here? Seriously?

Anyone who whitewashes what the protest is about to complain about how they personally feel offended by the protests are being self-centered by making it a point that they care more about a show of patriotism toward a symbol than the very rights that symbol protects.

Again, just an observation of the facts.

The question becomes, do you find offense with the protestor's message? If so, by all means, explain why. If you find fault with how they're going about it, well, that's a bit trickier. Because, last time I checked, that wasn't up to you -- how people choose to peacefully protest. And all your inane memes and bellyaching on social media doesn't change the fact that you're still missing the point.

Any which way you look at it, it looks a lot like whitewashing. Because that's exactly what it is. More specifically, it's whitewashing because these bellyachers are attempting to make the issue one of patriotism -- specifically matching your patriotism to their patriotism -- then they complain when you point out they've changed the subject. Because, after all is said and done, what have they said in this whole debate on the issue of the disenfranchised or the initial message of blacks being treated unfairly that sparked the controversy?

Well, then. I rest my case.

And that, folks, is called whitewashing the issues away.

All that anyone needed to do or say about Kaepernick's form of protest is that he has the right to do so. Then bite your goddamn tongue, and put your own hand over your damn heart and practice your freedoms however you want to and let others do the same. That's all it deserved.

Sorry to get political for a moment, but it had to be said. I'm tired of all these bellyachers complaining about being offended. Nobody cares. Fine. Be offended. Now shut up about it and let the rest of us get on with our lives.

And, while you're at it, maybe try not to whitewash important social issues in the future. It really does make you look like a bunch of self-serving, self-centered, culturally insensitive assholes.