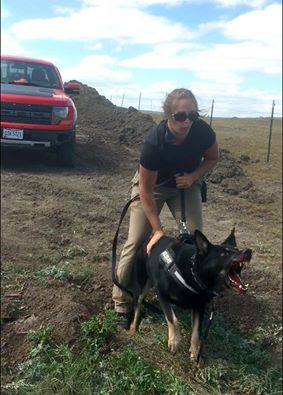 When my father, Wayne L. Vick, who was working for Northern Telephone struck the deal with the Blackfeet tribe in Browning, Montana, to plow fiber optics through sacred Native American grounds, he was smart about it.

It took 2 years of negotiations -- many of the times he went to meet with tribal leaders they *never showed* due to being on "Indian Time" and using it as a way to dissuade my father from negotiations. Granted, it was frustrating for him, but it was their land. Their rules.

He jumped through all their hoops for 2 years, but he always respected their customs, their culture, and their practices. And once they were satisfied he was doing the right thing by giving their tribe high-speed Internet and communications so they could set up a community college, they finally agreed to let him (and his big telecommunications company) plow the allotted fiber.

He never once sent attack dogs after anyone.

The stuff happening with the Dakota Access Pipeline and them attacking peaceful protestors is beyond messed up. The fact that police haven't stepped in to disrupt the violent attacks of unarmed civilians is beyond disgraceful.


See more articles about this at: