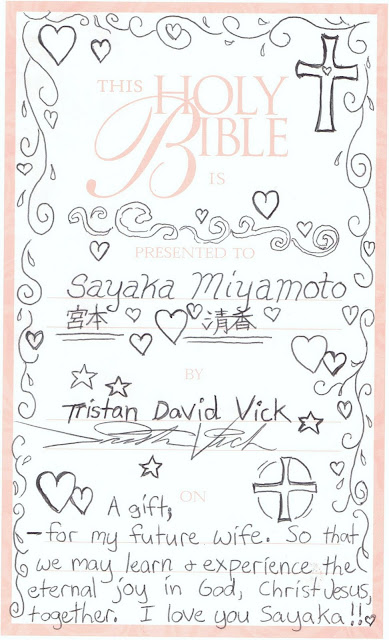 Embarrassed by Faith
Sometimes I run across an atheist or ex-believer who was so embarrassed by their prior religious affiliations that they don’t even want to talk about it. Granted, this is their right, but for me personally I find that by addressing my past embarrassment I can get it out there as a cathartic exercise in showing what not to do, how not to think, how not to act.

Before we were married I bought my wife an NIV study Bible, and on the dedication page I wrote the message that you see above. At the time it didn’t cross my mind how insulting it would be to tell someone else from a totally different culture that they were wrong, to expect them to change for me without justification, and to relinquish their entire upbringing along with societal and cultural beliefs because (for some reason) mine were true and hers weren’t.

I don’t know how she even put up with me those first few years. Insulting, impertinent, and insolent know-all doesn’t even begin to describe such lack of respect. But do you want to know how I justified it? I’ll tell you, it was because I had faith and she didn’t. That’s how I knew I was right and she needed saving.

Buying my wife a Bible, at the time, seemed like the best way to express my love. I wanted to share with her this deep and meaningful faith I had. Not only this, I wanted to save her eternal soul as not to suffer being apart from her. How greedy and self centered is that? Not only was I so lonely that I wanted to bring her over to my side as to keep her, since my church had strong opinions on marrying others outside of the faith, it was the only way I could ensure both happiness and a continuation of my faith.

In retrospect, it looks damn selfish not to mention flagrantly foolish. Here I was telling a gorgeous intelligent woman not to be who she was but to be something other than what she was. Basically, don't be Buddhist because I'm Christian is not a valid argument. I’m lucky she didn’t leave me completely for a more level headed man.
Well, what can I say? The heart wants what the heart wants. Love is more powerful even than faith (see my Deconversion Testimony HERE). And it was because of this love that I was forced to re-evaluate everything that I thought I knew. Even so, in the end my rational brain finally turned on. After years of indoctrination into a bizarre faith with even stranger beliefs, I finally came to see the light of reason. Better late than never, if you ask me.
Now that I've studied the fringe movements of Christianity quite a bit, and have dealt with people worse off than myself (ever hear of the cult called Universal and Triumphant?) then I think you'll understand why I can identify with embarrassing and wildly asinine religious ideologies. I have sympathy for those caught up in such muddled thinking... and that's one of the reasons I write—to act as a beacon of reason. May it help to guide others out of the confusion of parochial, inward-looking, partisan types of faith.

I’m not saying anyone must agree with me or believe what I believe, but that by challenging their religious beliefs, and by questioning them, they might begin to think for themselves and, perhaps, learn to see things less myopically, less one-sided, that is to say, if willing, less blinded by faith. For them, a new way of seeing, a better way if you ask me, awaits them.
Posted by Tristan Vick at 12:19 AM