First off, I do not see the Scarlett A itself as a symbol of belief... it's a symbol of affiliation with those who reject the belief of theism for whatever reasons, ergo atheism (hence the choice of the letter A).
For those worried that affiliation equals religious institution, that shared beliefs equal dogma, and that agreement means conforming to some diktat, don't jump the gun just yet. Modern icons are used by various groups with affiliation in mind, just think of the popular sports icons such as the New York Yankees logo or the red crescent of the Red Cross, these symbols do not necessarily denote any sense of dogmatism, but act as a way to show one's affiliation by  showing their personal support for their favorite sports team or local charity.

Affiliation need not mean we are like minded. Politics is a good example to think about, since it depicts affiliation with people who, more often than not, may all be part of the same party but can't seem to agree on anything as they each hold diverging opinions or ideas about key topic issues. It's about solidarity not conformity.

Groupthink need not apply to atheists either, and therefore, in this autonomous sense the Scarlett A simply shows that there are more of us out there, that we're not just some fringe group of angry rabble rousers. Every time an educated speaker wears the pin on their lapel it shows that atheists aren't just God hating religious bashers, to the contrary, it shows we are thinking sophisticated people with morals and values too. Indeed, it shows that there are other ways of thinking.

I think that's the first major element to the Scarlett letter A and what it represents.

So although it may include a sign of affiliation, it's affiliation with people--not ideologies. This is a key difference which often goes overlooked. It needn't be considered dogmatic for this reason.
Whereas a cross (crucifix) represents one orthodox way of thinking--one dogma--one God, just one way--the Scarlett A, on the other hand, represents the rejection of this theistic hierarchy of restrained thought and dictated beliefs. A Scarlett letter A can represent a myriad of possible trains of thought, all of them valid, none of them bound to dogmatic limitations of any one particular creed. One way to test this is to ask what dogma could it possibly represent? See? Nothing comes to mind.
This directly ties into, and leads leads us to, the second use of positive symbolism. The Scarlett letter A has a positive connotation too. Naturally people think of words like Awesome, Able, American, Autonomy and so on when they see the bold letter A. It sparks positive imagery not only on an aesthetic level but contains a rich subtext of deeper symbolism as well.
Not only all this, the third aspect is that it truly does have a nice aesthetic value, especially in such an elegant font. As such, it looks nice as a pendant, button, or jewelry too. So if you're an atheist who likes to dress up, now you can dress up in style! Although I speak only for myself, I say it's about time. Hopefully I'll see you around, fellow atheists! 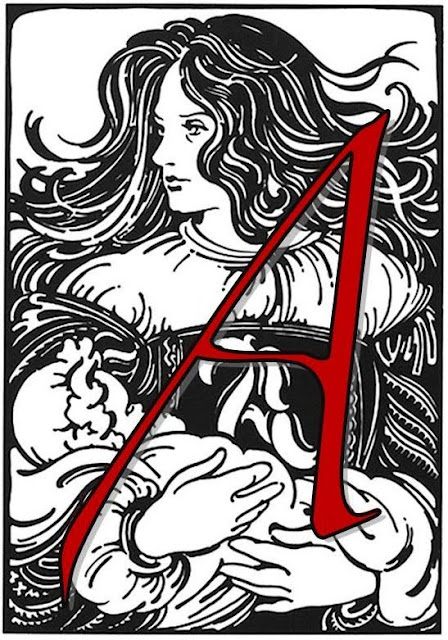