How to Raise Kids as Freethinkers: Not Zombies for Jesus

July 22, 2013
A close friend of mine posted a question concerning her confusion regarding how to answer her child's astute observation and subsequent question, "Where is God?"

Here's the screen cap I took (edited to protect the identities of my friends). 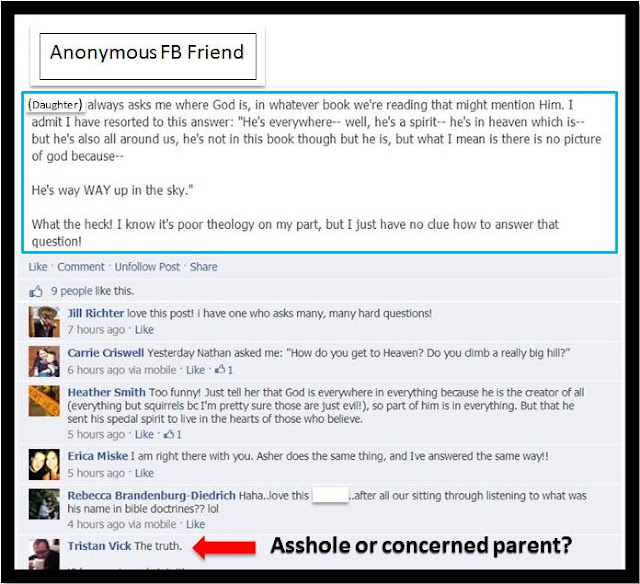 My answer began with "The truth."

My assumption is that her child is just wanting to know where God is because everyone in her community simply takes for granted the existence of God. Meanwhile, the child, unable to detect this God that everyone is so fond of paying lip service to merely asks where is this person everyone talks about, all the doo-da day long, as if he were *actually in the room with them.

Also, I was being somewhat sardonic in "the truth" being an agreement of the child's observation, there is no detectable God, so where the heck is he?

Kids aren't stupid, after all. But they can be misinformed and lied to by authority figures, and often times, their own parents.

Being a parent myself, and this being my friend, who posted her concern about how to best inform her child, on top of my being an educator, I saw a silver lining in how to perhaps introduce the novel idea of not brainwashing one's child with authoritarian professions of faith and help them on the path of thinking independently. So I continued on with my advice, writing:

This is the moment you can teach her how to question independently or, do what most religious parents do, simply tell her what to think based on authority.

At least then you will be raising an independent thinking, questioning, child full of curiosity. Instead of doing what most religious parents do by telling their children what they ought to believe without so much as giving them a choice.

Anything else would simply be indoctrination. With Solara, I am constantly trying to let her question. When I can't provide information, I honestly tell her I don't know, and ask her opinion anyway!

I hope my friend takes some of my advice to heart. I'd hate for her simply to listen to the commentor after me whose brilliant advice was:

I think you did a great job telling [your daughter] about God. Also, tell her, that Jesus can live in her heart forever.

Yeah. That's not really advice. That's merely telling a person what to believe. Good job reinforcing your belief system and not allowing your child to ask questions because you feed her warm fuzzy lies instead of teaching her how to think on her own.

Is it a wonder that religion goes after children? If an adult says "Jesus lives in your heart forever," then that child simply has to take it on faith that what they're told is true. There's no way for a child to understand what that even means let alone comprehend the theology behind it. A child can't check to see if it's true. They just get stuck having to believe it. And that's a crappy thing to do to a developing mind. Stop it dead with nonsense. At least give them the chance to question your authority!

Meanwhile, the child's original instinct to ask "Where is God?" when, in fact, she cannot see what everyone is talking about, alludes to the fact that the child's instincts are good ones. She's not mistaken.

She wants to know because she cannot find any signs or evidence for God, but people won't shut up talking about him. After a few more comments I felt I had to chime in one last time.


I'm still seeing a lot of "tell her this" and "tell her that."
How about letting her question, guiding her curiosity, and letting her have room to formulate her own beliefs, and more importantly, change those beliefs if she changes her mind.

It's the difference between educating your child an not. That's all I think I'm going to say on the subject.

With my daughter, I want her to ask questions and try to figure out the answers on her own. I'll be there to guide her. But I'm never going to tell her anything "lives inside her heart forever"... not only because it's kind of freaky and weird ... but also because it's a flat out lie.

The religious seem to be very comfortable lying to their children. I always have to stop to think about whether or not my daughter can handle the truth, and if so, whether or not the lie is even necessary. Most of the time, I want her to come to her own conclusions, so I don't even need to bother with justifying would be truths. I just let her follow her natural borne curiosity to wherever it takes her. The lie is unnecessary.

My daughter was only three when she learned about death. When we saw a dead bird, and she asked why it wasn't moving, I told her what happens to things when they die. The next day we found a dead rat. The ants were eating it. A week after that, her great grandfather died. She seemed to comprehend that when people died they no longer were in their bodies. And the body went away. She asked me where the person went to after their body disappeared, and this is a natural thing for a child to ask, and I simply said "I don't know." Because that's the truth. It's the limit of my knowledge. But I reassured her that her great grandfathers DNA live on inside her.

If my daughter one days decides she believes in God. Fine. At least I can be content knowing she reasoned her way to that conclusion, instead of just taking what others told her at face value, simply because they're bigger than she is and ought to know better.

Clearly, the sad truth is, many adults don't know better. They don't know because no one ever taught them to ask questions. Scroll back up and re-read the comments. Nobody is asking questions. Nobody is thinking for themselves. They're just parroting each other's proclamations of faith. Why do they do it? Because their parents never taught them to think for themselves.