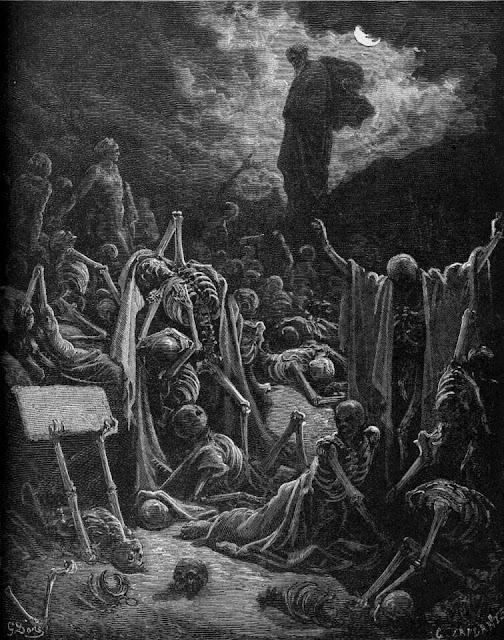 Theodicy--the vindication of divine providence in view of the existence of evil.

Christians posit a Good God created everything, the universe, the world, and the birds and the bees, etc. But we distinctly live in a world with evil in it. There is injustice, great suffering, pain both physical and mental. The Problem of Evil is the whole reason that the theological consideration of theodicy becomes such a conundrum for Christians--because not only do they have to answer for the evil in the world, but they must also explain why a Good God would allow for it.

Theologians do this in various ways, most frequently invoking free will as an excuse to bring about original sin and through sin the perishing of the world along with all the evils which come along with it. Yet this line of reasoning fails to account for the suffering of animals or that suffering which is caused by natural disasters such as hurricanes, tsunamis, mine shaft collapses, so on and so forth.

Another common objection is the so-called problem of good (the inverse of the problem of evil) which basically states that there is good in the world so how can you account for it unless God was at least partially good? Never mind that evil is naturally occurring, such as suffering and pain, whereas good events are not naturally occurring--that is to say nature remains indifferent to our happiness and well being (a fine day is not sunny and warm just to make you happy but the wind could very well blow over a tree which comes crashing down on you causing you severe pain and even crippling injuries).

However, before they can even get to this point in the argument they have to justify all sort of strange theological exegesis to justify an unfounded metaphysical claim (i.e., that sin is real) and often choose to ignore any criticisms which may find fault in their fly by night theories. But I have a possible solution--a much simpler theory--an inference which not only accounts for why there is evil in the world but will still allow for the possibility of God.

Here's my theory, take it or leave it.

Putting aside esoteric theological considerations, ad hoc harmonizations, and poorly conceived Christian apologetics, minus all the ifs and buts, I am inclined to agree with Stephen Law, namely that the best explanation which does away with the problem of theodicy is that God is evil! Before you get bent out of shape hear me out. If God is *all good--then the creation of a world where evil, pain, and suffering are all very real is a major problem (since no all loving or just being would allow for it to begin with) which means one of two things: either believers are completely wrong about the nature of God (i.e., God is not all good), or their God simply does not exist (i.e., pain and suffering exist in a natural world apart from supernatural entities or metaphysical states).

Now the theory of a capricious, pernicious, or even malevolent God explains why there would be evil in the world and therefore explains away the Problem of Evil.

Most Christians, I think, will object to the fact that God (as they understand it) could be evil. Sure, I'll go with them on this (assuming the God of the Bible is not the best representation of God), but then, this means the best inference which accounts for evil in the world is that God is non-existent. Oops! Pain and suffering do (undeniably) exist in a naturalistic universe and often have regrettable consequences, and thus the Problem of Evil is a bane for the theologian and a boon for the atheist. Indeed, it seems to be positive evidence (via induction) that minus God we know that evil would still exist and we know this to be true (via deduction) because we are stricken by evils daily. So no amount of appealing to God's goodness will solve the problem or explain away the contradiction.

Changing the definition of God (by redefining his character as to allow for evil, etc.) merely appeals to the first objection, that believers simply haven't understood the nature of their God, and in ad hoc fashion, must change their definition of God to work around the problem. This is, contrary to what they may believe, strong evidence that they have no real (or clear) understanding of God (should he exist) and therefore their claim of God's "goodness" is without support. Yet having failed to establish a believable concept of God which simultaneously accounts for the problem gives them no basis for support that their concept of God is even very practical, meaning that the very existence of evil fully negates their concept of God (and changing the way they define God only reinforces the dilemma). Thus we are left with option number two as being the more probable one: no *actual God exists.

In conclusion, Theodicy and the Problem of Evil leads to one of two possibilities, both antithetical to Christian belief, either 1) God is capricious, pernicious, perhaps even evil or else 2) God is non-existent. Knowing this we should have no problem rejecting the notion of evil-theism any more than we would a theism which posits a good God but is logically and philosophically incoherent.
evil God problem of evil Stephen Law theodicy